Mzansi singer and performer, Makhadzi has explained why she pulled out of the “Tshivhidzelwa” music video shoot with Tuksin SA.

One thing several Mzansi artists have understood is that no matter how big you are, people will always question some of your moves. Mzansi singer and “Ghanama” star, Makhadzi recently got a taste of that after fans criticized her feature on the song “Tshivhidzelwa” by rising producer, Tuksin.

Some felt that she didn’t deserve to jump on the song. In their opinion, the song was big without her, and didn’t really need her on it. As a result of the criticism she got for it, the “Murahu” star has announced that she pulled out of the song’s music video shoot.

She also took to her Facebook page to explain her reasons for doing so. She revealed that she was disappointed by some of the comments from people concerning her feature. Check the full post out below. 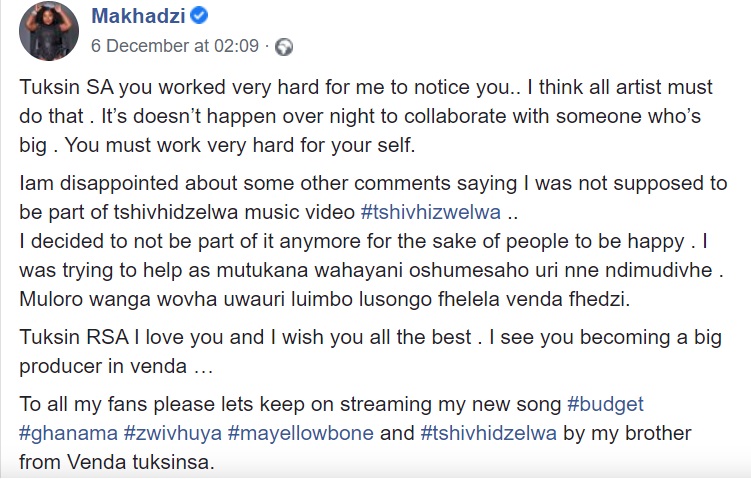 Tags
Makhadzi TuksinSA
John Jabulani Send an email 9 December 2021
Back to top button
Close
We use cookies on our website to give you the most relevant experience by remembering your preferences and repeat visits. By clicking “Accept All”, you consent to the use of ALL the cookies. However, you may visit "Cookie Settings" to provide a controlled consent.
Cookie SettingsAccept All
Manage Privacy