Popular Venda artiste Makhadzi has laughed off Babes Wodumo’s claims about her relationship with Mampintsha.

In a video which has long gone viral, Babes Wodumo had lashed out at Makhadzi, claiming that the “Kokovha” singer slept with her husband Mampintsha. For this, she had threatened to beat Makhadzi up if she should run into her.

Where Makhadzi had expected Makhadzi to respond in a rage, she had laughed off Babes Wodumo’s action as nothing other than the rantings of someone on a publicity stunt.

She joked about what her boyfriend’s reaction will be as she’s trending over another man. She also indicated it would be her last response on the subject.

By the way, in the said viral video, Babes Wodumo had also lashed out at her mother-in-law. Many denounced her over it. She’d later apologized, noting it was just a publicity stunt for her new album, “Crown.”

While she apologized over what she said regarding her mother-in-law, she deliberately refused to apologize to Makhadzi. 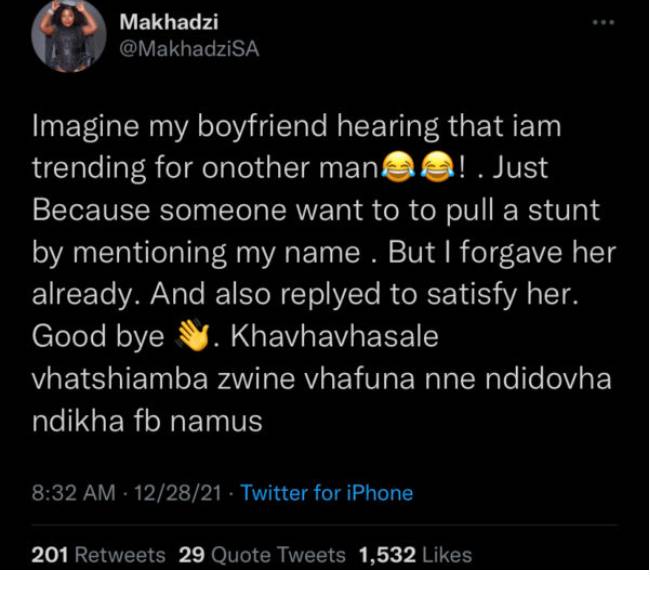 Well, it appears like Makhadzi has no time for unnecessary drama and has dropped just a few words to let Babes Wodumo know she, Makhadzi, is privy to the whole nonsense. Well, it remains to be seen how Babes Wodumo will react next.

Tags
Babes Wodumo Makhadzi
John Israel A Send an email 29 December 2021
Back to top button
Close
We use cookies on our website to give you the most relevant experience by remembering your preferences and repeat visits. By clicking “Accept All”, you consent to the use of ALL the cookies. However, you may visit "Cookie Settings" to provide a controlled consent.
Cookie SettingsAccept All
Manage Privacy