A recent video circulating on social media platforms shows Venda queen Makhadazi pushing one of her dancers off the stage. Makhadzi, who is enjoying the recent success of her latest song with Master KG is seen in the video spraying water on fans while her dancer did the same.

The singer is understood to be one of South Africa’s finest stage entertainers and her energy can’t be matched, as she gives every concert her all. The video circulating online has garnered diverse reviews; while some individuals tried to comprehend the situation, others asked that the Ghanama hitmaker clarify what transpired and eventually apologise.

Closely looking at the video, it appears that Makhadazi was trying to caution her dancer, who was spraying water while jumping up and down to stop spraying the water because it was either getting at her or the crowd. Trying to tap her, Makhadzi then pushed her from the back, and unexpectedly the dancer who lacked enough balance because of her state of mind fell to the crowd.

Looking at the video from another angle, it appears that Makhadzi intentionally pushed her dancer off the stage because she appears to have used too much pressure. The video is now a topic for discussion on social media platforms, and the  Venda queen is being bashed for her action while some feel it was not intentional.

Makhadzi or anyone from her team has not clarified the incident. Watch the video. 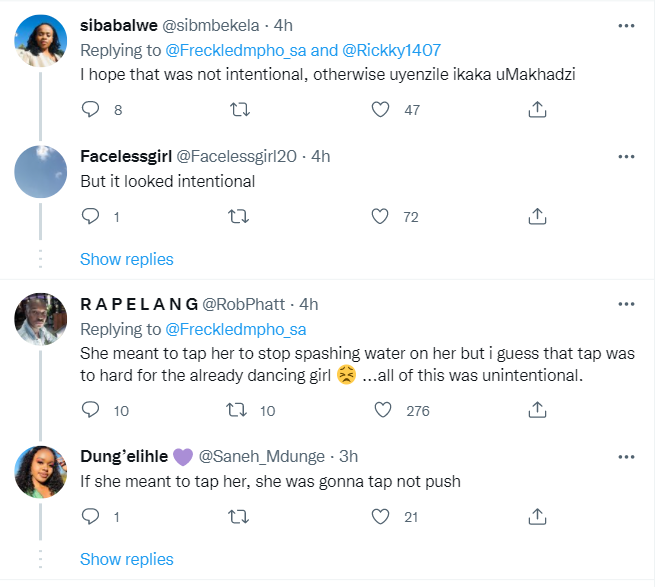 This is what Makhadzi did to her dancer…… pic.twitter.com/L1wL17m4Io

Tags
Makhadzi
James Lethabo7 March 2022
Back to top button
Close
We use cookies on our website to give you the most relevant experience by remembering your preferences and repeat visits. By clicking “Accept All”, you consent to the use of ALL the cookies. However, you may visit "Cookie Settings" to provide a controlled consent.
Cookie SettingsAccept All
Manage Privacy