Literally everyone has wondered the kind of relationship that Mzansi singer, Makhadzi and her ex, Master KG have. We still cannot figure it out. The two broke their fans’ hearts when they announced that they had parted ways as romantic partners.

But they have since maintained a professional, or musical relationship. Indeed, the music must be made. The “Ghanama” singer recently released a new KG collaboration tagged “Hekulakwe”. The song has received praise from fans and has been doing quite well. Now, we hear she’s set to host the “Jerusalema” star’s birthday celebration next Saturday.

KG unveiled the poster featuring him and Makhadzi. According to reports, early bird tickets are already sold out. The event will take place on Saturday, January 29th. Fans seem impressed that the two continue to prove that they’re friends first before anything else. Shout out to them. 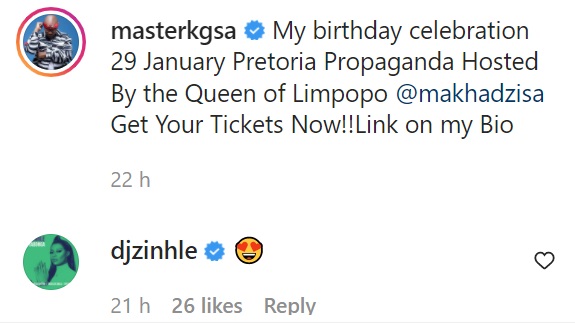 Tags
Makhadzi Master KG
John Jabulani Send an email 20 January 2022
Back to top button
Close
We use cookies on our website to give you the most relevant experience by remembering your preferences and repeat visits. By clicking “Accept All”, you consent to the use of ALL the cookies. However, you may visit "Cookie Settings" to provide a controlled consent.
Cookie SettingsAccept All
Manage Privacy