Shauwn ‘MaMkhize’ has decided to respond to rumours about her joining the cast of the ‘Real Housewives of Durban’.

Besides expensive drip and posting snaps taken in private jets and exotic places nothing showcases rich women living lavish lifestyles like The Real Housewives of Durban, and fans have been prodding MaMkhize to join in the rich women movement. In fact, many viewers of the reality TV show have gut feelings pointing to MaMkhize being a perfect fit for Real House Wives of Durban, and therefore should be part of the cast!

Now, she is finally coming out to respond to the rumours and gut feelings. This was done in a post put up on her Instagram stories, where she stated categorically that she had no interest in joining them, though the response had a derogatory undertone for the women on RHOD. 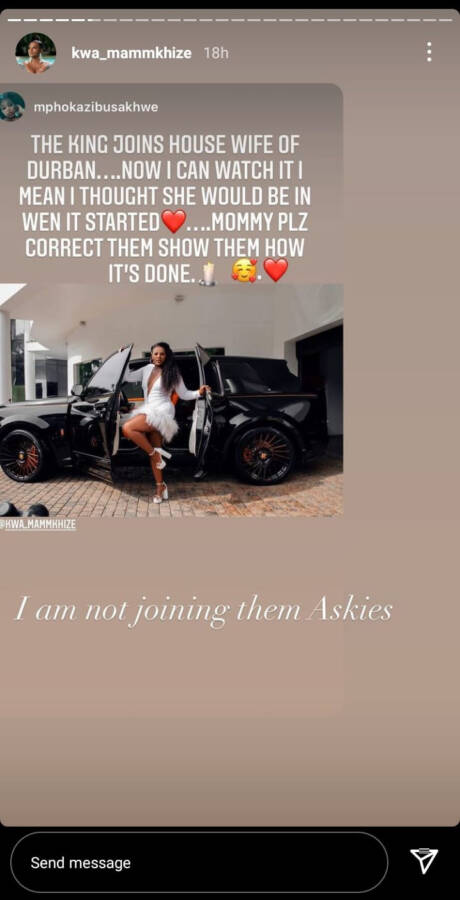 Fans of RHOD have, for a while, felt that the cast was incomplete in some way. While the women on the reality TV show are doing the best they can to put on a terrific show, most folks are still of the opinion that there are some other rich and powerful women whose presence will bring a different cooler feel to on the show, spicing it up in the process.

Tags
MaMkhize RHOD
Ikedichim Chibundu21 February 2022
Back to top button
Close
We use cookies on our website to give you the most relevant experience by remembering your preferences and repeat visits. By clicking “Accept All”, you consent to the use of ALL the cookies. However, you may visit "Cookie Settings" to provide a controlled consent.
Cookie SettingsAccept All
Manage Privacy