West Ink boss Mampintsha and wife Babes Wodumo have got a new song for their son Sponge Wodumo. Or rather, the tot is ready to share his cries with the world in what his parents have dubbed a song. Either way, fans are waiting.

In a recent post to Instagram, Babes Wodumo, long famous as “Gqom Queen,” in reference to her album of the same title, had shared a teaser of what she described as her son Sponge Wodumo’s first single, while asking fans when she should release the full track?  Expectedly there was a storm of suggestions on when the song should drop.

Mampintsha had followed his wife’s path, sharing the same teaser an asking when the song should be released. He had his owns suggestions, some of which aligned with those on Babes Wodumo’s post.

Either way, it is clear new music is on the way, and fans of the couple can’t wait to listen to it. 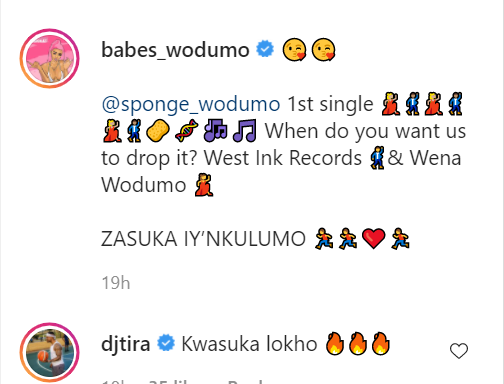 Sponge Wodumo is Babes Wodumo’s first child. The tot was so named because Mampintsha’s mother had claimed Babes Wodumo was faking her pregnancy, using a sponge to extend her tummy.

The tot is here already and it appears like his parents can’t wait for him to start rocking the stage, like they do.

Tags
Babes Wodumo Mampintsha Sponge Wodumo
John Israel A Send an email 27 July 2021
Back to top button
Close
We use cookies on our website to give you the most relevant experience by remembering your preferences and repeat visits. By clicking “Accept All”, you consent to the use of ALL the cookies. However, you may visit "Cookie Settings" to provide a controlled consent.
Cookie SettingsAccept All
Manage Privacy