Sunday is just a few hours away. Already, though, fans of reality television show Idols SA are gearing to view the day’s performance.

It will be showstopper week, and the trending group Mapara A Jazz will perform their hit song “John Vuli Gate” live before the audience. The group has expressed excitement at the prospect of performing on the Idols SA circuit.

“John Vuli Gate,” the hit, was released in collaboration with Ntosh Gaz and Colano and has been viewed over one million times on YouTube.  The song has spawned a dance challenge which has since gone global. 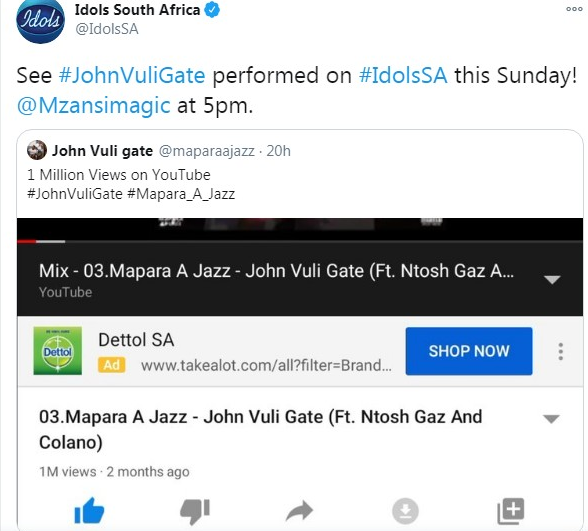 However, controversy persists over the ownership pf the song “John Vuli Gate.” Ndivhuwo Nephawe, a brother to McMillan “Man Malaya,” one of the two members of the Mapara A Jazz group, is claiming that McMillan “Man Malaya” stole the song from him and his band Scara Chilli Ya Baba sometime in July.

According to Ndivhuwo Nephawe, Mapara A Jazz stole the song after a studio listening session they were invited to. You can check out the backstory here.

Well, are you looking forward to Sunday 1 November 2020, when Mapara A Jazz will perform “John Vuli Gate”? you may share your thoughts in the comments below

Tags
Mapara A Jazz
John Israel A Send an email 31 October 2020
Back to top button
Close
We use cookies on our website to give you the most relevant experience by remembering your preferences and repeat visits. By clicking “Accept All”, you consent to the use of ALL the cookies. However, you may visit "Cookie Settings" to provide a controlled consent.
Cookie SettingsAccept All
Manage Privacy