It looks like South Africa would have lost one of its notable music voice, Maraza. The songster himself stated what would have been an “accidental” suicide on his part.

Maraza has been pretty open about his life on social media, so when he spoke about accidentally taking his own life, he had the attention of many on the microblogging platform.e

By the way, the songster also informed fans that a strange number has been calling him for the past two weeks. However, each time he tapped to answer there would be no sound from the other end. He couldn’t explain it and wouldn’t want to rationalize it. You can check out his tweet below. 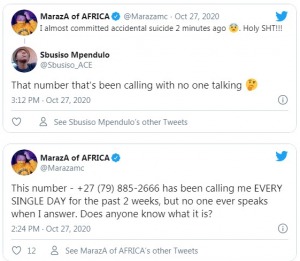 Well, what are your thoughts on Maraza’s claim that he would have committed suicide by accident? You might want to join the conversation by dropping your thoughts in the comment section below.