Not many knew Master KG and Makhadzi were in a relationship until they broke up. Even at that, both were silent about the breakup until Master KG announced it to the world.

At the time of the announcement, the pair had broken up months earlier. When the “Jerusalema” star announced the breakup, he was denounced by most of Makhadzi’s fans because she was trending at the time over her fine performance at the Lockdown House Party of DJ Shimza and friends. The argument then was that Master KG was trying to steal her shine.

Well. It appears that although the two have broken up, they are still close friends and not fighting each other over their split.

This much became obvious when Master KG won four awards at the 2020 AFRIMMA and even got crowned style icon at the South Africa Style Awards. Master KG tweeted about his style icon award, and Makhadzi shared the tweet, writing “Congratulations mukwasha.” 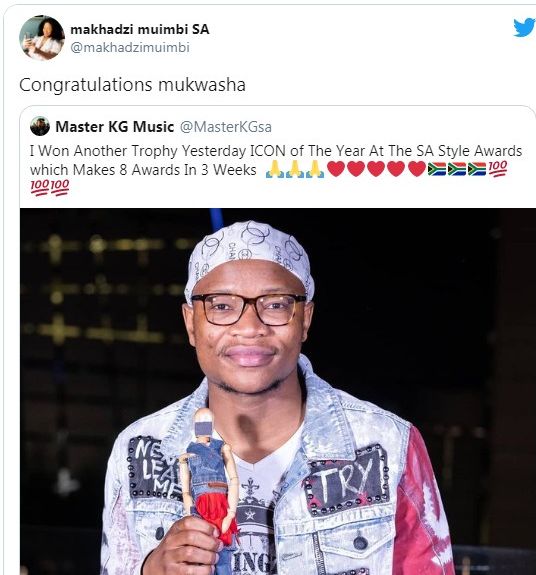 Fans were taken aback by her note of congratulations, with many asking to known what “mukwasha” means. A fan suggested it means son-in-law, and another suggest that the true meaning of the word is the person who broke a woman’s virginity.