The appointment is backed by the letters of the DSAC Cultural Programme, which aims to take artistes of South Africa to other countries to showcase their creativity as well as the musical and cultural variety of the Rainbow Nation.

Nomcebo broke the news on her Instagram page 15 hours ago (yesterday 28 July 2020), stating she was honoured to have been chosen alongside her gifted “Skeleton Move” muso Master KG.

She thanked the minister for recognizing her hard work as well as those of her compatriot. She also thanked her fans for making the song “Jerusalema” the global hit that it is today. 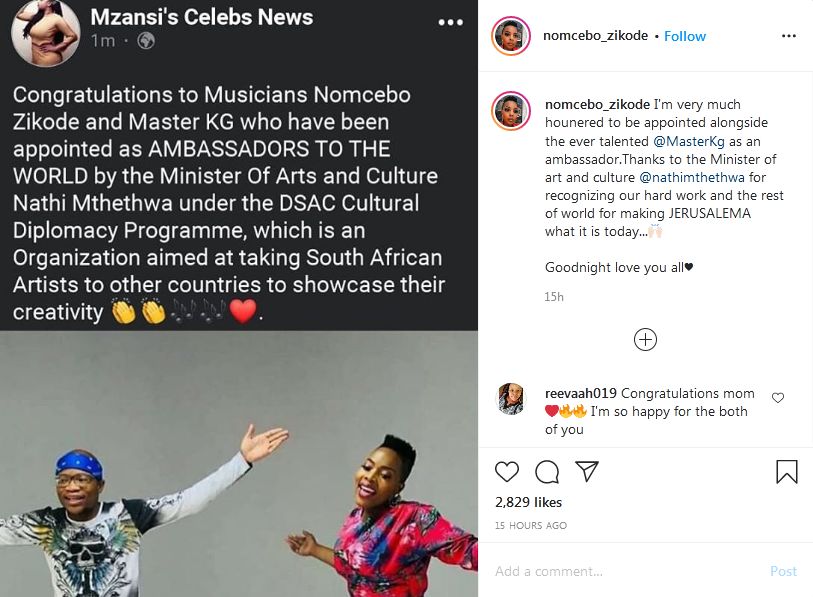 Last we checked the music video has a milestone of over 52 million YouTube views, the highest number from any song by Master KG to date. It is followed by the music video for “Skeleton Move” (23 million plus), which was released earlier.

By the way, international DJ Black Coffee recently noted “Jerusalema” was a hit in Switzerland.

What do you make of the pair’s recent appointment? You might want to join the conversation by dropping your thoughts in the comment section below.

Tags
Master KG Min. Nathi Mthethwa Nomcebo Zikode
John Israel A Send an email 29 July 2020
Back to top button
Close
We use cookies on our website to give you the most relevant experience by remembering your preferences and repeat visits. By clicking “Accept All”, you consent to the use of ALL the cookies. However, you may visit "Cookie Settings" to provide a controlled consent.
Cookie SettingsAccept All
Manage Privacy