It is always fun following all that our fave celebs get up to with their fans on social media. Master KG’s recent interaction with his followers on Twitter left us in stitches. We might need your help figuring out if he was kidding or being serious.

It all began when the “Skeleton Move” star shared a photo of himself with cake to celebrate his ’25th’ birthday. Everyone knows his birthday just passed. However, rather than congratulate him, his fans chose to argue about his age. Some revealed that they believe he is older than he has said he is.

The “Jerusalema” star hilariously reacted to a fan saying he looked 42. He finally ‘came clean’ revealing that he’s 35 years old. Now, no one knows if he’s being serious or just messing around. The laughter emojis have us thinking he’s playing. What do you think? 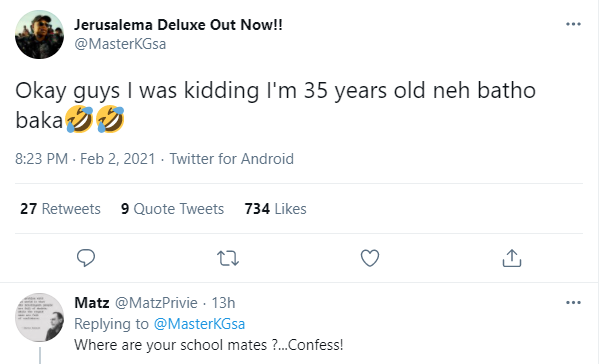