Open Mic Productions star, Master KG is still riding high from the success of his hit song “Jerusalema”. The song has refused to decline in popularity and is still making big moves. A recent update by Africori shows that it has bagged KG a new record.

As the video hit 350 million views on YouTube, it becomes the first African video to reach this milestone. That’s a new record. Shout out to the king. Master KG has been reaping massively from the success of the song from last year into this year.

He has bagged several international awards including an MTV EMA and more. The remix of the song is still pulling a lot of weight on the Billboard World Digital songs chart. And the official video on YouTube had exceeded 3.5 million likes. A big shout out to him. 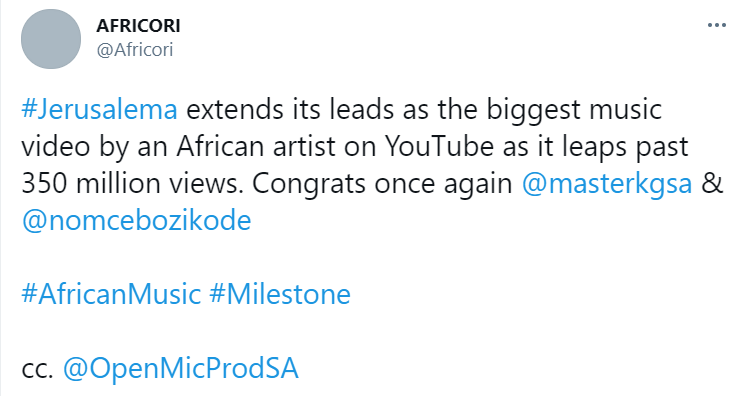 Tags
Master KG
John Jabulani Send an email 3 March 2021
Back to top button
Close
We use cookies on our website to give you the most relevant experience by remembering your preferences and repeat visits. By clicking “Accept All”, you consent to the use of ALL the cookies. However, you may visit "Cookie Settings" to provide a controlled consent.
Cookie SettingsAccept All
Manage Privacy