In case you haven’t heard, Master KG is still reaping the success of his hit song “Jerusalema” featuring Nomcebo Zikode. The talented muso was listed at number 44 on the global artists ranking for streams across platforms, Apple Music, Spotifyand iTunes.

Just recently, he recorded 40 million views for the “Jerusalema” video, now, it’s crossed the 50 million mark. The song has also spurred on various dance challenges across nations including America, Chile, Nigeria, and more. To add to its lists of milestones, the hit song has also been named the fourth-most searched song on the Shazam app. 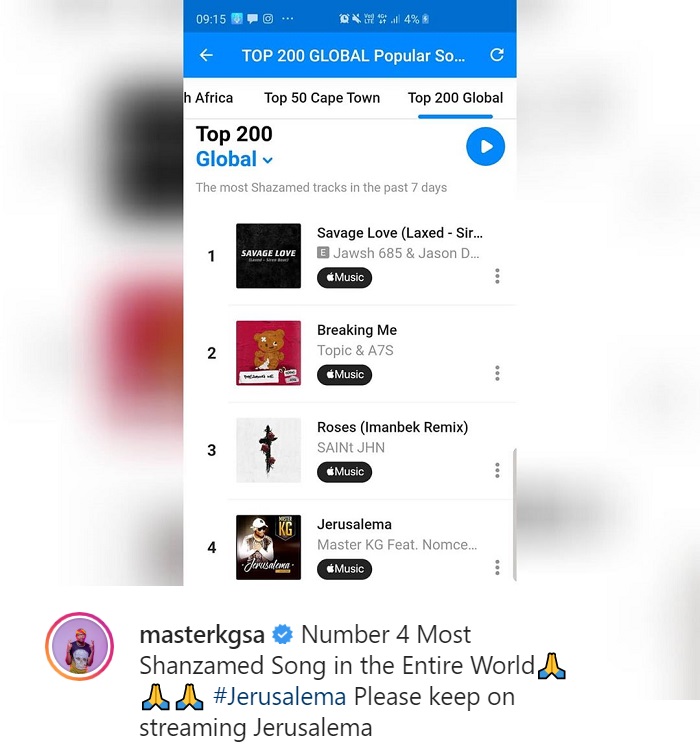 We can’t all believe all the success the talented muso has amassed with his music in just a short while. Speaking about the success of the song, he also hinted on it surpassing that of his previous hit “Skeleton Move” featuring Zanda Zakuda. In a statement, he said,

“Two years ago I dropped Skeleton Move which did 23 million views as my first single as a mainstream artist. Seeing Jerusalema doing even more makes me emotional. When we recorded this song on 29 August 2019 with Nomcebo, we never thought it would go this far.

“Thank you to everyone involved in the success of this song. This is proof that God has time for everything. I am happy and I thank God for taking me this far. I look forward to more,”

Tags
Master KG
John Jabulani Send an email 27 July 2020
Back to top button
Close
We use cookies on our website to give you the most relevant experience by remembering your preferences and repeat visits. By clicking “Accept All”, you consent to the use of ALL the cookies. However, you may visit "Cookie Settings" to provide a controlled consent.
Cookie SettingsAccept All
Manage Privacy