Master KG’s song with Burna Boy, “Jerusalema (Remix),” has been certified gold. The song was released just a few weeks back.

The original track, “Jerusalema,” was a global hit and inspired the Limpopo artiste to link up with the Nigerian afrobeat champ to remix the song. Actually the remix elicited mixed actions on release, with some fans commenting that it did not meet the hype. Others said out loud that the original track was way better

Well, whatever the verdict, “Jerusalema (Remix)” isn’t doing badly right now. At least the recent gold certification confirms this. According to SNEP, the song has been streamed 15 million times. 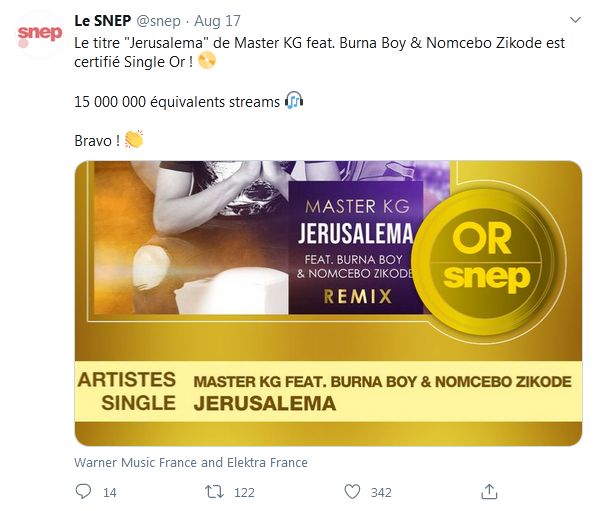 Just to be clear, the gold certification by SNEP is markedly different from that by the Record Industry South Africa (RISA), which carries more weight in the Rainbow Nation. Anyway, Master KG shared SNEP’s verdict on his song in a tweet on 17 August.

Will the (RISA) also certify the song gold? Well, we see that happening soon, for “Jerusalema (Remix)” is still the song of choice for many in Mzansi.

What do you think of the recent gold certification for “Jerusalema (Remix).” You may want to join the conversation by sharing your thoughts in the comment section below.