The string of successes continues for Master KG’s “Jerusalema” song, featuring Nomcebo. On YouTube alone, the song has been streamed over 170 million times. And on Spotify?

The song isn’t doing badly on that as well. It has emerged that, in fact, the song has been streamed over 100 million times on Spotify, making it one of the most streamed South African songs on the platform ever.

Africori shared the news of the milestone, and Master KG retweeted it, indicating just how excited he wass about the latest success. Two praying hands emojis indicated he was grateful for the win. 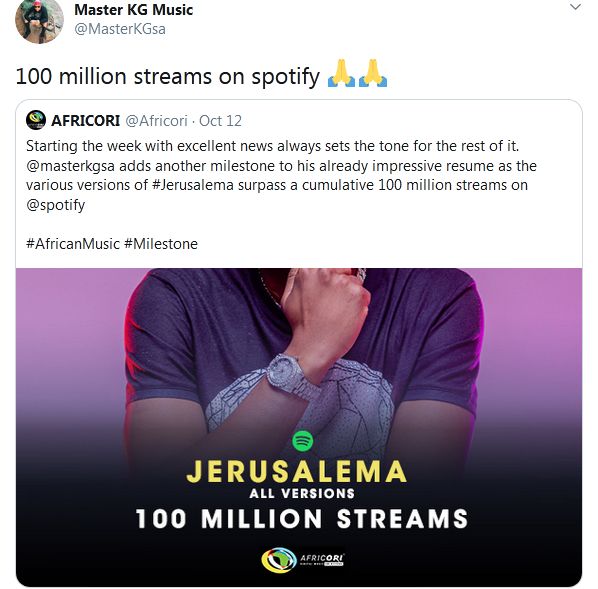 By the way, the songster recently thanked radio stations in South Africa and across the world for supporting his music career, most especially for consistently playing his “Jerusalema” song and making it the global hit that it is today.

The song had inspired a dance challenged which President Cyril Ramaphosa of South Africa encouraged his people to participate in on Heritage Day September 24.

It has been predicted that “Jerusalema” will soon reach a milestone of 1 billion views. If this should happen, it would be a record for a South African. The coming months should reveal a lot. Y’all gotta stay tuned for updates.