Metro FM, one of the premier radio stations in South Africa, has just released its new rooster for the rest of the year and 2023. Ms Cosmo, ProVerb, Khutso Theledi, Mpumi Mlambo, and Tbo Touch are on the lineup.

In case you missed it, weeks back, the blogosphere was agog with the news that Tbo Touch will be returning to the station. Well, he’s officially back at the station now, as Metro FM unveiled him alongside other broadcasters.

Tbo Touch will be presenting the afternoon drive show dubbed Touchdown With Tbo Touch. It will be broadcast every weekday from 3 pm to 6 pm.

His return sparked excitement from the obscure to the mighty, with EFF leader Julius Malema noting in a tweet that the station will not be the same again with Tbo Touch’s return.

My boy @iamtbotouch is back in the building; @METROFMSA will never be the same. The return of the best will threaten only those with low self-esteem. Congratulations my guy, kill them.💃🏼🕺🏼💃🏼🕺🏼📯📯📯 pic.twitter.com/tAlPHV2n0T

The new rooster indicates that ProVerb will be hosting a segment on the network as well. He will be on the 12:00 – 15:00 weekday slot with Lerato Kganyago (Midday Link Up with LKG and Proverb).

Ms Cosmo is not only part of the Metro FM lineup, she’s happy to anoounce the same to her fans on Instagram. 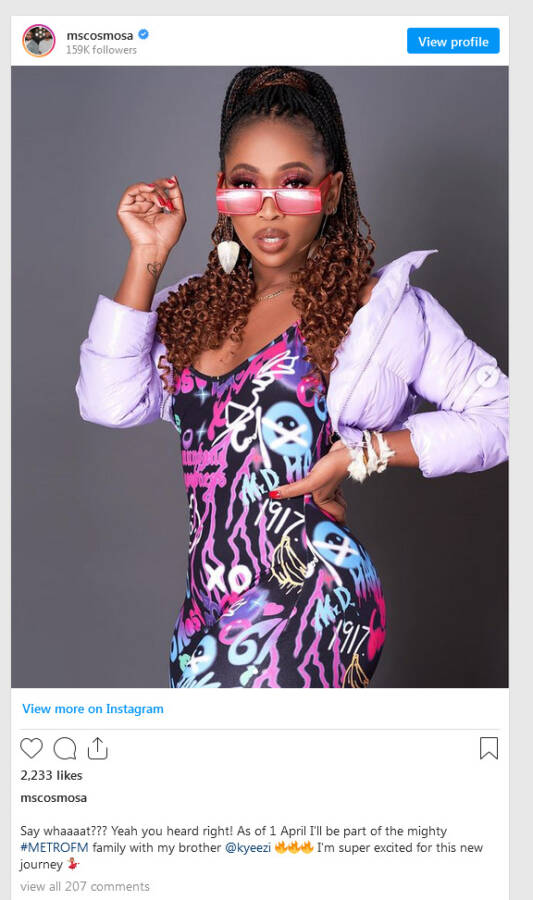 By the way, the newly announced line for the statio will ake their debut on April 1.

Tags
Metro FM Ms. Cosmo Proverb Tbo Touch
John Israel A Send an email 18 March 2022
Back to top button
Close
We use cookies on our website to give you the most relevant experience by remembering your preferences and repeat visits. By clicking “Accept All”, you consent to the use of ALL the cookies. However, you may visit "Cookie Settings" to provide a controlled consent.
Cookie SettingsAccept All
Manage Privacy