Social media wars are nothing new in the hip hop industry or any industry. So when rapper MI Abaga and the entertainment journalist Joey Akan got into a heated argument over DaBaby’s visit to Nigeria, not many were surprised.

The songster Ycee had complained – called out the organisers of Rick Ross’s Easter show – which had no Nigerian rapper on the lineup.

MI Abaga had similar sentiments, tweeting that, in 2008, he had his first big gig with Jay-Z, Rihanna, and Usher. A key lesson from that moment for him was that foreign musicians would not respect Nigerian musicians until they respect themselves.

In a follow-up tweet, he noted that he had been invited to see Rick Ross. He asked if he could do it one-on-one. The organisers declined, so he never met the American. He ended up by saying the afrobeat industry will not respect hip hop. That’s fine, still, according to him. Rappers should create stuff for those who appreciate them.

Much later, when another American rapper, DaBaby, visited Nigeria on Davido’s invitation, Joey Akan had used it to mock MI Abaga, asking why the American wasn’t having a one-on-one with local talents. He ended by saying the rappers should go and drag Davido since they possess an entitlement mentality.

That was how the war erupted. See how it went in the screenshots. 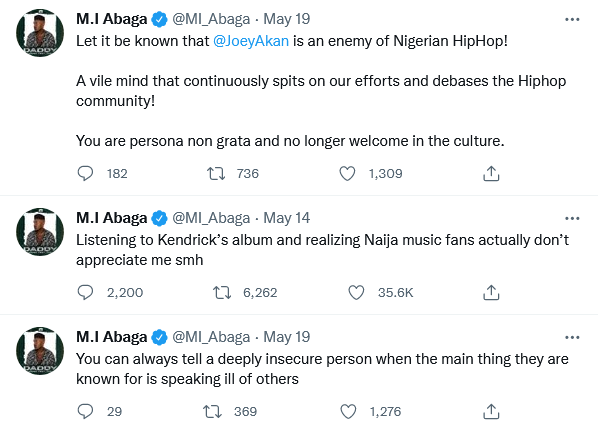 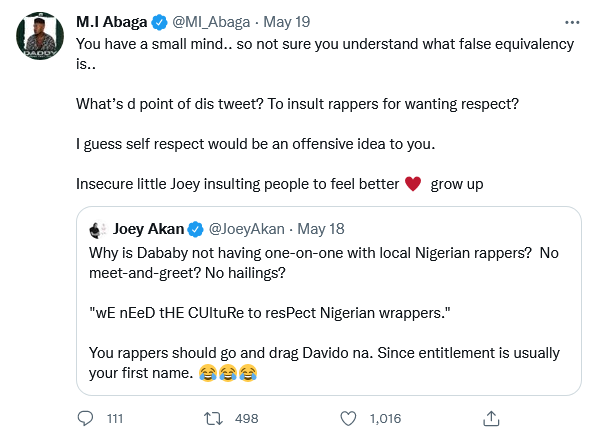 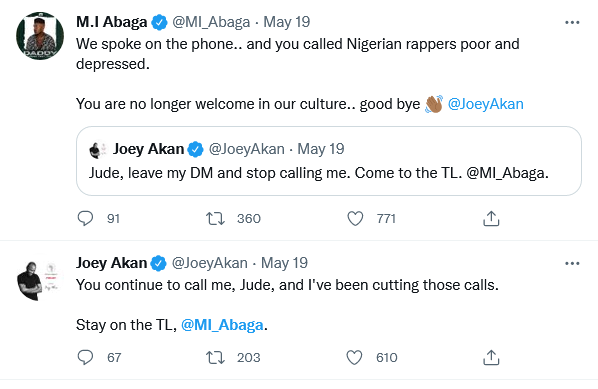 Tags
Joey Akan MI Abaga Nigeria
John Israel A Send an email 20 May 2022
Back to top button
Close
We use cookies on our website to give you the most relevant experience by remembering your preferences and repeat visits. By clicking “Accept All”, you consent to the use of ALL the cookies. However, you may visit "Cookie Settings" to provide a controlled consent.
Cookie SettingsAccept All
Manage Privacy