Daveyton’s Michelle “Mphowabadimo” Mvundla, popularly known as Mpho in the house, has emerged the winner of the Big Brother Mzansi 2022 on Sunday evening after 13 weeks of living under 24/7 surveillance on live television. It has been an eventful long week with the program trending every day with the hashtag #BBMzansi, #BigBrotherMzansi, #BigBrotherMzansi2022 and simply #biggie.

Housemates’ names were also on top of Twitter trends for the whole 13 weeks. Mvundla, who became the only female in the top five, defeated Gash1 to win the cash price of 2million rands grand and the winner of this 2022 season.

Most observers resonated with Mvundla for her representation of a society of spiritual healers, a part she decided to shine a spotlight on during her Big Brother journey. 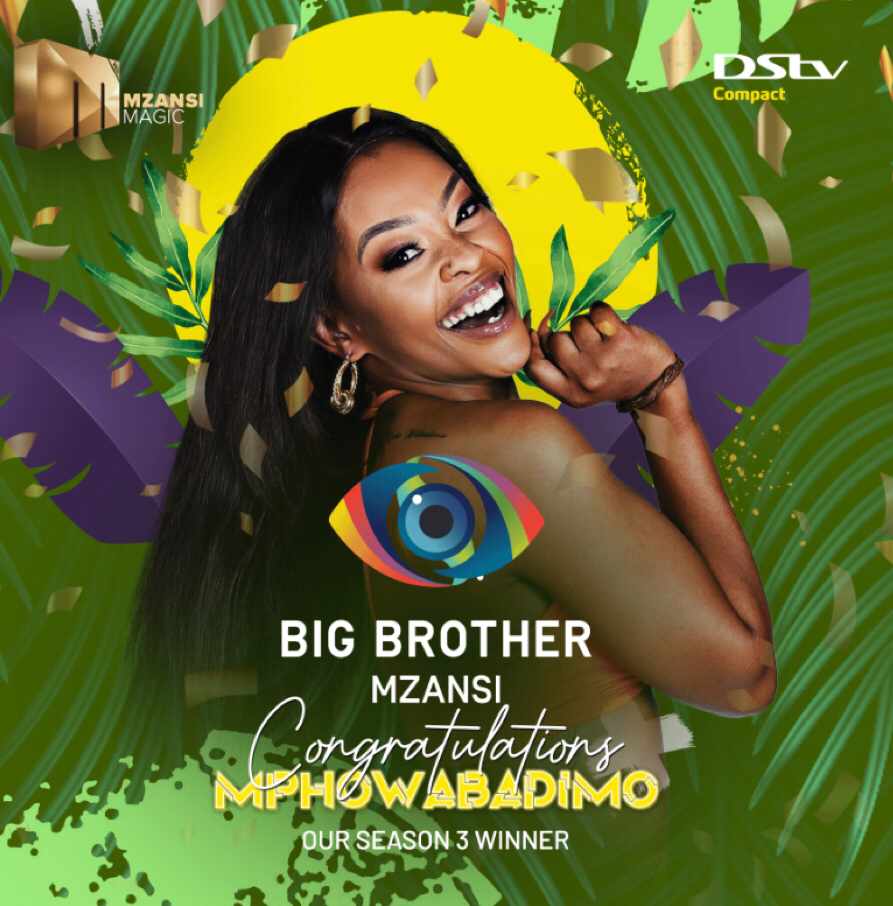 Mavundla’s fanatics, known as The Underground Gang continued to support her through to the ending after she was selected for eviction several times. The 27-year-old mum of one charmed South Africans with her calm vibe and outgoing “no sh*t” qualities. Viewers across Mzansi became defensive of the housemate when she was constantly ridiculed for her spirituality by other housemates.

Fans also valued her openness about her history and devotion to her calling. They also respected her resilience, positivity, and willingness to forgive and move on with life.

The show returned in January after a long wait by fans of the show and presented contestants to South Africans. They include Terry Treasure, Vyno, Dinky Bliss, B.U and Venus. Some of the contestants joined, while some were evicted from the house. With 20 participants stepping into the house, only five made it to the finale – Themba, Tulz, Libo, Mphowabadimo and Gash1. 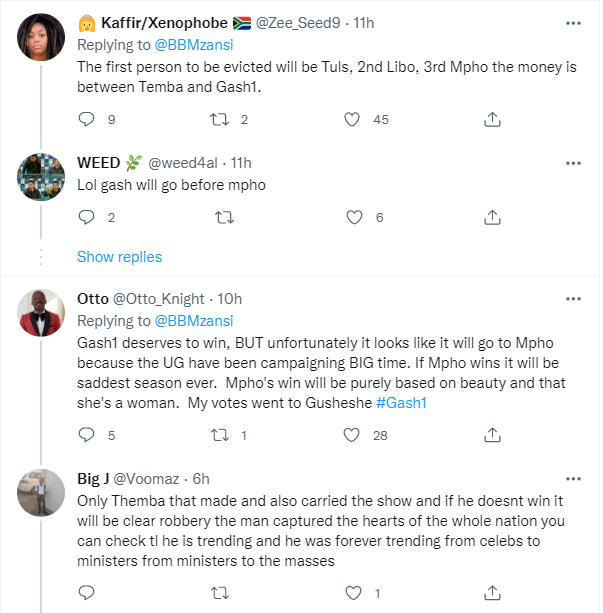 Suppose the constant trend on social media is anything to go by. The contest has consistently been between Themba, Gash1 and Mphowabadimo as they hold a majority of the fanbase and support.

Gash1’s supporters are called The Gashers, while Themba’s are called The Ghostnations. These supporters did everything to rescue them when they got selected for eviction from the house in earlier weeks before the finale. Viewers deemed housemates such as Thato or Sis Tamara more worthy to be in the final week over Libo and Tulz. The reason is that Tulz has never been selected for eviction, and Libo was rescued by Themba when he won the supreme veto power. The veto power granted Themba the authority to choose two housemates to bring with him to the finale.

In all honesty no fan base voted as hard as the original Beke and Beke twins fan bases. UG and Gashers you are GOATS 🐐🔥🔥🔥🔥🔥 Congratulations to our TOP2🔥🔥🔥 #BBMzansi #Gash1𓃵 #MphoWaBadimo𓃵 #BigBrotherMzansi pic.twitter.com/Mrp9xGHXC4

From the show’s commencement, debate hit the season when Keamogetswe Motlhale, popularly referred to as Q.V. from Mahikeng, unexpectedly left within three days of joining. She had suffered from mental health issues that she thought were illed, but the show brought back memories. So she decided to leave “to protect her mental health”.

Terry surprised Mzansi when she revealed that she was an adult content actress and operated on the popular OnlyFans platform. She decided to use the medium to educate the housemates about the advantages and disadvantages of maintaining an OnlyFans account.

Another participant who used the opportunity to represent the LGBTIQ community was Sis Tamara, and numerous viewers appreciated her unrestrained spirit and openness.

While many relationships were built and friendships earned, housemates formed connections in the house. Terry linked up with Vyno, Gash1 got entangled with Thato, and Venus hooked up with B.U. and Themba. Venus, nevertheless, chose not to date any of the dudes after her eviction. See reactions from Twitter trends below.

"This is the face of a winner"..oh I'm gonna miss my baby Mpho so much 😭❤️📿👏🏾 #MphoWaBadimo𓃵 #BBMzansi https://t.co/kpimRQPuOK

They said the money was Ghosted🤣🤣🤣 #bbmzansi

If "reality show" was a person ,that would be #MphoWaBadimo𓃵…the face of a winner baba #BBMzansi pic.twitter.com/OWJa391FRO

Now who is the real influencer mo?🤣 pic.twitter.com/DD2xBmrt9C

Who is Mpho?, Find out more about the winner here.

Tags
Mpho
Thato Siyabonga Send an email 3 April 2022
Back to top button
Close
We use cookies on our website to give you the most relevant experience by remembering your preferences and repeat visits. By clicking “Accept All”, you consent to the use of ALL the cookies. However, you may visit "Cookie Settings" to provide a controlled consent.
Cookie SettingsAccept All
Manage Privacy