South African beauty influencer Mihlali Ndamase knows exactly what she wants before saying “I do” to the man who might want to marry her. And poverty is not one of them.

A Twitter user recently noted that her client bought his wife a boat and scoffed at the fact that some people are still arguing over flowers. She ended her tweet by encouraging ladies to aim for the best.

Reacting to the post, Mihlali Ndamase noted that’s exactly the reason she doesn’t believe in settling. She noted that there are men who go all out to please their women and she wouldn’t settle for a relationship with fewer charms. 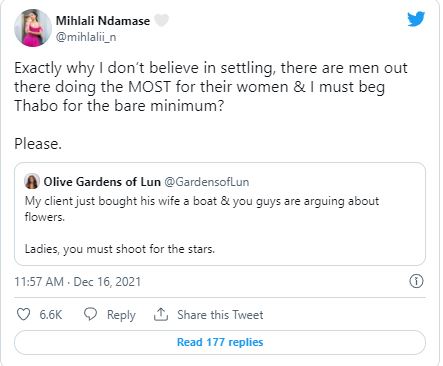 Her thoughts provoked mixed reactions from tweeters, with most of the ladies endorsing her view and insisting they wouldn’t settle for less. There were some blokes spurring the same narrative as well.

Well, there were some Twitter users who questioned the narrative, though, wondering what the ladies who are asking for the best would bring to the table. Just a pair of boobs?

Anyway, Mihlali Ndamase has never hidden her love for the soft life. She had previously dated Bandile Mbere of Major League. Also, she’s informed fans that she’s removed her IUD, leading to speculations she’s ready to have a child.

Tags
Mihlali Ndamase
John Israel A Send an email 18 December 2021
Back to top button
Close
We use cookies on our website to give you the most relevant experience by remembering your preferences and repeat visits. By clicking “Accept All”, you consent to the use of ALL the cookies. However, you may visit "Cookie Settings" to provide a controlled consent.
Cookie SettingsAccept All
Manage Privacy