It looks like a young South Africa’s life is about to change forever, courtesy of Mlindo The Vocalist, one of the country’s notable musicians.

Recently a video of a young man singing trended online. Many who watched the video spoke positively about the man’s voice. The man has since been identified as Martin. Mlindo was one of those charmed by the man’s voice and he made an effort to locate him.

Mlindo The Vocalist tweeted, asking fans to locate the man for him. He said the man’s life is about to change. 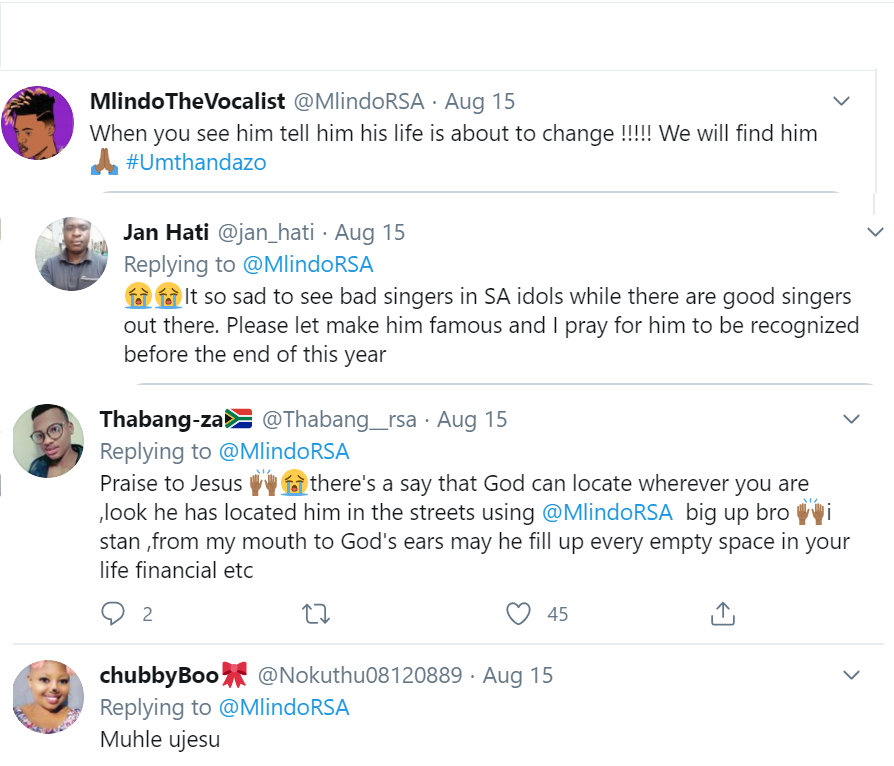 later he announced that he and his team have got Martin an acting role. Martin was unaware of it. He would announce later that Martin was in Johannesburg and he (The Vocalist) in Durban. So he arranged for his manager to meet Martin instead. 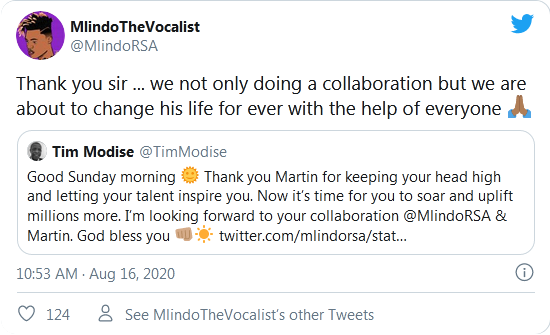 Mlindo The Vocalist and Martin had a chat thereafter.

Mlindo The Vocalist’s kindness to Martin has been greeted with emotional tweets of gratitude from fans. Many thanked him for giving Martin a chance at success.

But Mlindo the vocalist’s initiative will not surprise anyone who has followed his career trajectory. Mlindo The Vocalist was himself discovered and given a platform by DJ Maphorisa of Blaqboy Music. He has been on a steady rise ever since.

Recently, he promised to release a song titled “Mama” when he reaches 500,000 followers on Twitter

Tags
Mlindo The Vocalist
John Israel A Send an email 17 August 2020
Back to top button
Close
We use cookies on our website to give you the most relevant experience by remembering your preferences and repeat visits. By clicking “Accept All”, you consent to the use of ALL the cookies. However, you may visit "Cookie Settings" to provide a controlled consent.
Cookie SettingsAccept All
Manage Privacy