Mohale Motaung has got a sister, Palesa, anyone out there would love to have – a sister who would no hesitate to rise to their defense.

Mohale, who recently broke up with his wife Somizi after their fairytale wedding, has been documenting his life since then on Instagram, showing he’s still standing and happy.

But it appears like some social media peeps are unimpressed with it all. These class of people have been camping in his comments since and accused him of being a gold digger who married Somizi for his money and fame.

It had gotten to bad that Palesa was forced to respond to the trolls. She dismissed them as motherfuckers who are always on Mohale’s case. She enjoined Somizi to tell his fans to stop shit about Mohale, who never wanted a cent from him. 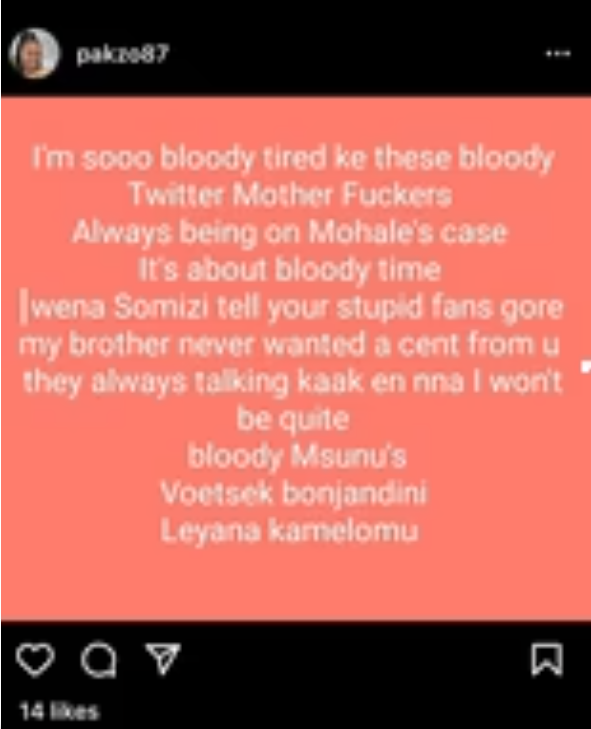 Last we checked, Somizi had not responded to her outburst. Actually, Somizi doesn’t want to have anything to do with Mohale again after they broke up publicly – and, some fans would day, acrimoniously.

Their breakup was hastened after an audio in which Mohale detailed the a uses he was experiencing in the marriage was leaked and went viral immediately. It led to Somizi losing his position as judge on Idols SA.

Tags
Mohale Motaung Pelesa Somizi
John Israel A Send an email 29 December 2021
Back to top button
Close
We use cookies on our website to give you the most relevant experience by remembering your preferences and repeat visits. By clicking “Accept All”, you consent to the use of ALL the cookies. However, you may visit "Cookie Settings" to provide a controlled consent.
Cookie SettingsAccept All
Manage Privacy