Jub Jub has been suspended at Moja Love after Amanda Du-Pont accused him of raping her years ago.

In an emotional video released December 2, Amanda Du-Pont, who’s now legally married, revealed that Jub Jub had raped her and instilled fear into her to make her believe that she shouldn’t get away from him.

She even claimed that he threatened to kill her at some point all in an attempt to make sure she doesn’t get away from him.

I was raped, physically and emotionally abused for two years by Jub Jub. The only thing I did wrong was keep quiet. But that ends here I will not be publicly ridiculed by this criminal. Him and Mac G saw it fit to drag my name on their podcast for clout at the cost of amplifying a Gender Based Violence Case. Any Attorney that can help me with a cease and decease letter or help with dealing with this man legally, please reach out. So that he can keep my name out his mouth. Not because I can’t afford it but because I want to make this a public fight. The fight is bigger than me. Dedicated to the woman who never make it out and end up dead😭💔

@channelotv and @multichoice_group should be ashamed to support this podcast

Wishing you all a safe and happy festive. Praying to God this never happens to your daughter, mother, sister or cousin or anyone you love.

Trouble actually started after Jub Jub’s appearance on Podcast and Chill with MacG during which he spoke on, among others, his relationship with Amanda Du-Pont and their sex lives.

Speaking on the podcast, Jub Jub had stated that he “smashed” (had sex with) Amanda Du-Pont. Reacting to the interview and Jub Jub’s claims Amadnada Du-Pont had released a video statement dismissing his claims. Instead, he claimed that he raped her – and he sometimes did that with her family around because she couldn’t scream then.

Her claims ignited Mzansi, with some peeps calling for a thorough investigation and others asking for his dismissal at Moja Love.

In a statement on Twitter, which you can check out below, the station had made it clear it doesn’t condone gender-based violence, insisting that Jub Jub has been suspended. 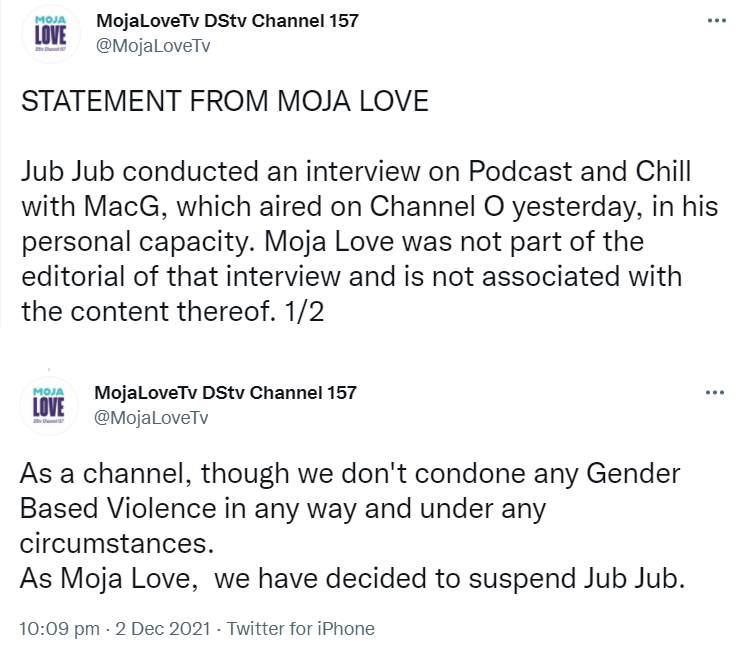 By the way, Masechaba Ndlovu has also just revealed Jub Jub raped her.

Tags
Amanda du-Pont Jub Jub
John Israel A Send an email 3 December 2021
Back to top button
Close
We use cookies on our website to give you the most relevant experience by remembering your preferences and repeat visits. By clicking “Accept All”, you consent to the use of ALL the cookies. However, you may visit "Cookie Settings" to provide a controlled consent.
Cookie SettingsAccept All
Manage Privacy