Moonchild Sanelly has announced starting an OnlyFans as promised.

The singer has been talking about setting up an account on the platform for a while. Yesterday, February 14th, she went on her Twitter page to break the news about finally starting an OnlyFans account.

“Ok ok finally starting an only fans,” she wrote. 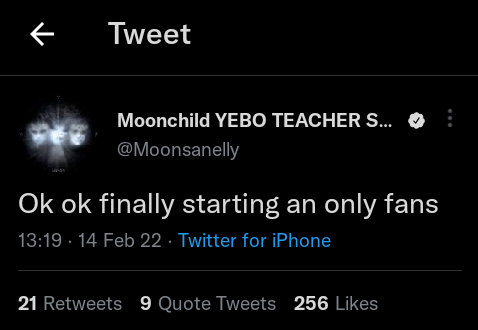 Her fans on Twitter have since expressed their emotions about the news. Some showed some excitement, while with a few others, the announcement did not sit so well. The singer made mention of setting up an account with the platform during her time with Mac G on his podcast “Podcast and Chill”, where she revealed that herself and fiancée have parted ways after two long years of dating.

“I never send nud*s, whatever I send you I’ve already shared with everyone on social media so that you don’t have power over me,” Sanelly added.

She also posted a steamy video on her Instagram account, telling her followers on the app to enjoy the video as it would be the last one she would be uploading there.

Tags
Moonchild Sanelly
Ikedichim Chibundu Send an email 17 February 2022
Back to top button
Close
We use cookies on our website to give you the most relevant experience by remembering your preferences and repeat visits. By clicking “Accept All”, you consent to the use of ALL the cookies. However, you may visit "Cookie Settings" to provide a controlled consent.
Cookie SettingsAccept All
Manage Privacy