The Moti brothers, Zidan, 7, Zayyad, 11, Alaan, 13, and Zia, 15, who were kidnapped from their home in Limpopo about three weeks ago have been reunited with their family.

The SAPS confirmed much. The police in the Vumani area had reportedly received a call from a resident who alerted them the kids had arrived at their apartment, stating that they were dropped off in a car.

The brothers had been abducted by seven gunmen while being driven from their home in the Limpopo area to the Curro Heuwelkruin School on October 20. 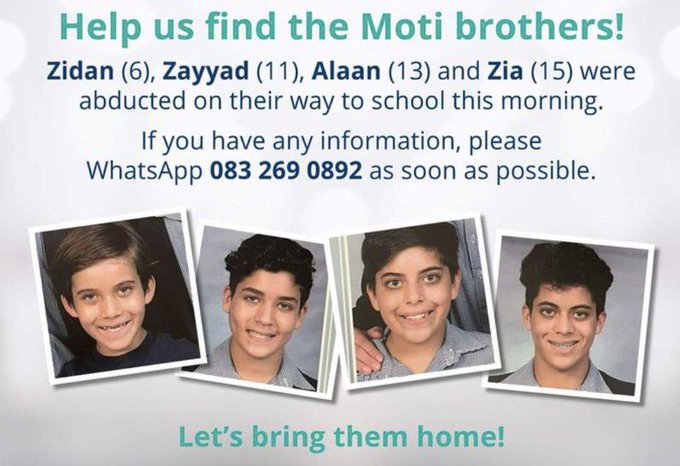 At some point following the abduction, the Moti family had. become silent, leading to speculations that negotiations were at an advanced stage to secure their release. However, it cannot be determined that ransom was paid before the boys were released.

Following their release, the boys’ parents Naazim and Shakira Moti noted via the Family’s businessman on Facebook that they are overjoyed and looking forward to healing as a family. They thanked Allah as well as South Africans who have to been praying for the boys’ release and well-being. 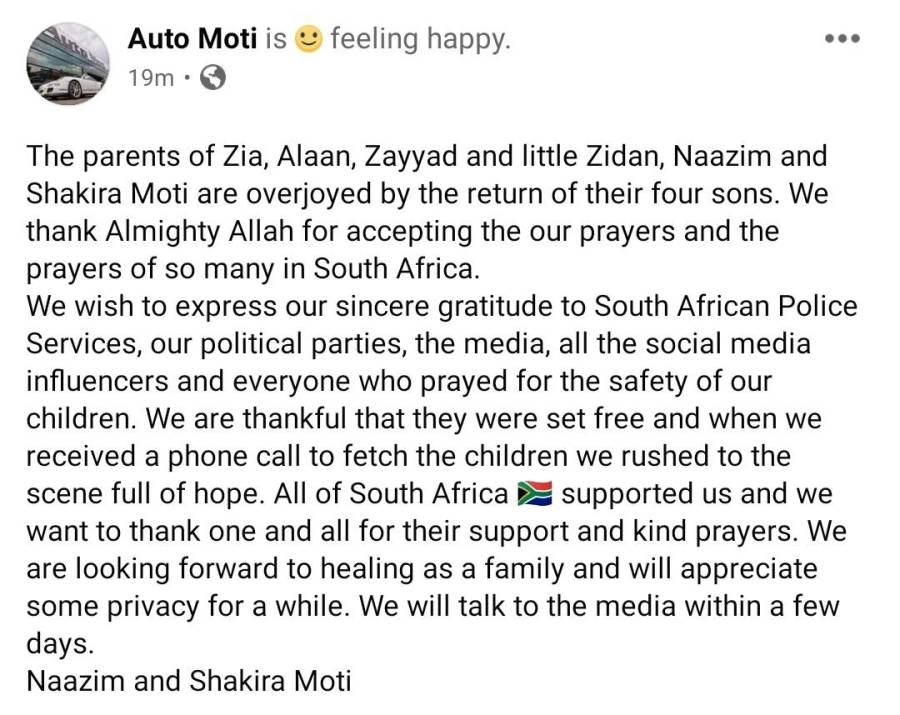 According to the police, a doctor was brought to check the boys and the doctor revealed that the boys were in good health.

Im glad the brother's were released and they safe in their parents custody,some aren't that lucky!! Polokwane is under siege, abductions of women is on the rise and I wish they two can receive the same amount of publicly as the brothers!! #MotiBrothers pic.twitter.com/vRyFaLvfUt

They would be interviewed soon with a psychologist from the SAPS present.

Tags
Alaan Moti Moti Zayyad Moti Zia Moti Zidan Moti
John Israel A Send an email 11 November 2021
Back to top button
Close
We use cookies on our website to give you the most relevant experience by remembering your preferences and repeat visits. By clicking “Accept All”, you consent to the use of ALL the cookies. However, you may visit "Cookie Settings" to provide a controlled consent.
Cookie SettingsAccept All
Manage Privacy