Amapiano producer Mr. Jazziq is furious with Mzansi politicians over the new COVID-19 restrictions and he’s lashed out at the government.

South Africa has been through a couple of lockdowns since the onset of the coronavirus pandemic, and among those deeply affected by those restrictions with musicians – people in the entertainment sector.

The restrictions were lifted and the politicos campaigned to their fill, with most of their rallies thronged with people and no one wondering if they were vaccinated or not.

And that’s one of the reasons Mr. Jazziq is furious with the politicians. In a recent tweet, he had highlighted the fact that politicians conveniently forgot about the virus and vaccinations when they were campaigning for elections.

But then according to him, after the elections were over, they are now talking about vaccinations and restrictions because they have achieved their object. As far as he’s concerned, Mzansi is topsy-turvy. You can check out his tweet below. 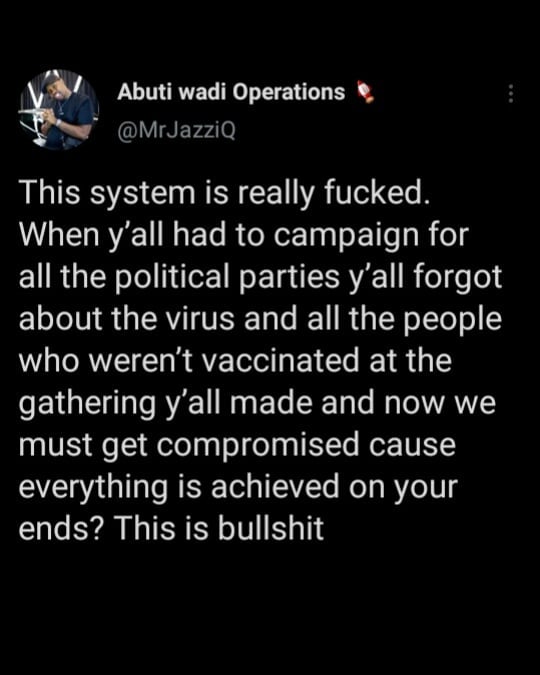 Mr. Jazziq is one of the most visible figures in South Africa’s amapiano universe. Previously one of the two-member band JazziDisciples, he’d gone solo after the group split. And he’s doing quite well.

But would the politicians listen to his view and relax the restrictions?

Tags
Mr JazziQ
John Israel A Send an email 29 November 2021
Back to top button
Close
We use cookies on our website to give you the most relevant experience by remembering your preferences and repeat visits. By clicking “Accept All”, you consent to the use of ALL the cookies. However, you may visit "Cookie Settings" to provide a controlled consent.
Cookie SettingsAccept All
Manage Privacy