It is a moment of triumph for South African singers and record producers Mr. Thela and Mshayi, as their collaborative album, “Make Cape Town Great Again,” has been confirmed platinum by the Recording Industries South Africa (RiSA).

Platinum certification is no joke – certainly not for any artiste, old or new, who takes growth seriously.

Mshayi acknowledges this much in a recent post in which he announced the certification of the joint project with Mr. Thela. He thanked the fans who made that possible. It’s an encouragement to do more. 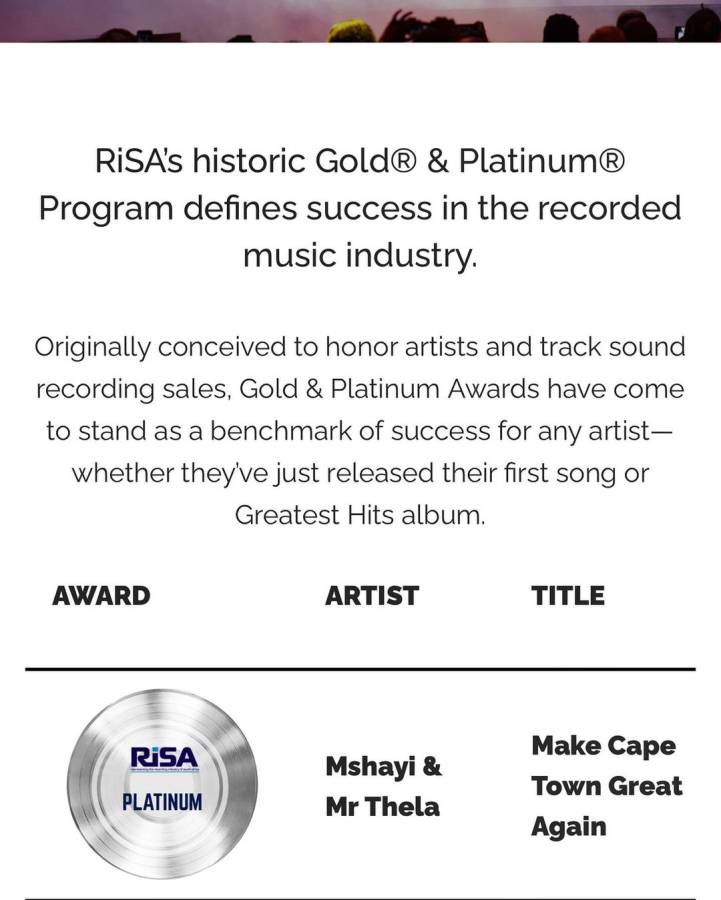 Mr. Thela himself shared a similar message on his Instagram page.

At the time of its release, “Make Cape Town Great Again” was described by many as a patriotic compilation. That probably stirred many music lovers in the direction of the project. The result is the milestone the two artistes behind it are right now celebrating.

Mshayi and Mr. Thela are gqom artistes, and it’s not all the time that music in that genre snaps records. So, one can only say they are doing something right somewhere.

If you haven’t listened to the platinum project yet, you may want to do so right away. It’s available here on UbeToo. Go listen.

Tags
Mr Thela Mshayi
John Israel A Send an email 30 November 2021
Back to top button
Close
We use cookies on our website to give you the most relevant experience by remembering your preferences and repeat visits. By clicking “Accept All”, you consent to the use of ALL the cookies. However, you may visit "Cookie Settings" to provide a controlled consent.
Cookie SettingsAccept All
Manage Privacy