American supermodel Naomi Campbell is now the mother of a child – a girl. What makes the birth particularly significant is that Naomi is 50 – an age many didn’t expect she could have a child.

Well, the baby is here and Naomi is “beyond thrilled” to have the baby in her life. Already, she has made it clear she’s sharing a lifelong bond with the child whose face she’s yet to reveal to the world.

Naomi never advertised her pregnancy – only the birth. So the world was justly surprised when she shared an image of her and the child together, the child’s legs in her right hand. She included a deep message about the child’s coming. 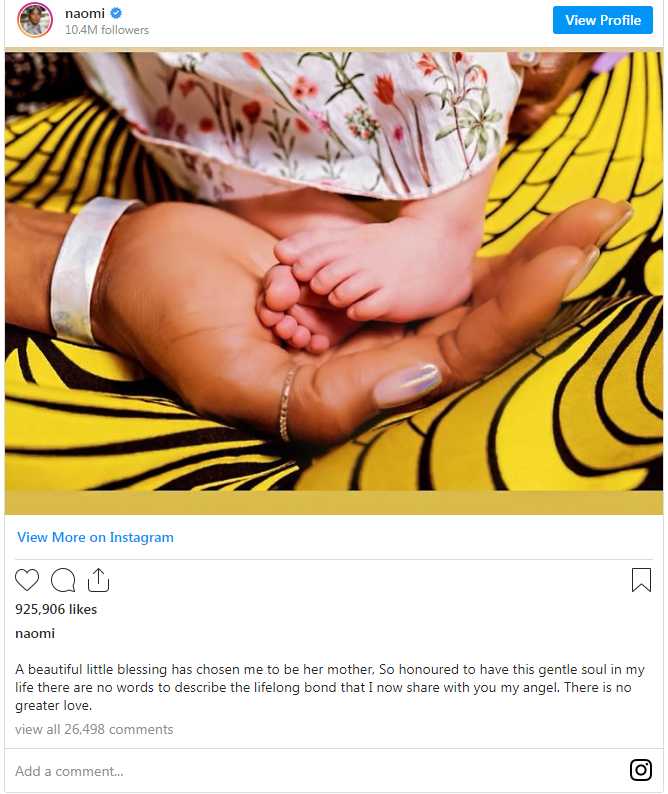 Naomi’s mother was equally excited, to have a grandchild. She shared the photograph of mother and child on Twitter, making it known that she had looked forward to this moment.

By the way, in a 2017 interview, Naomi had stated that she had always wanted to be a mother. At the time she was apparently not in a hurry to, since, according to her, she can have a child when she wants – because of science.

Well, what do you think of Naomi Campbell becoming a mother at 50?

Tags
Naomi Campbell USA
John Israel A19 May 2021
Back to top button
Close
We use cookies on our website to give you the most relevant experience by remembering your preferences and repeat visits. By clicking “Accept All”, you consent to the use of ALL the cookies. However, you may visit "Cookie Settings" to provide a controlled consent.
Cookie SettingsAccept All
Manage Privacy