Sometime last year, Mzansi was shocked to find that Bandile Mbere, one of the brothers that make up the boy band Major league, was wearing moon boots and was walking with the aid of crutches.

Mzansi wondered what happened to his leg, but the songster would not share the details. So it came as a massive relief to many of his fans and admirers when he ditched not just the moon boots but the crutches as well, walking with ease, traveling the world.

The problem with his leg appears to have returned, however.

In a recent post to his Instagram stories, the songster had shared a picture of him rocking the moon boots he’d formerly jettisoned. “back to square 1,” he noted wearily, adding a few other words that indicated he was weary with the injury and the aids he’d have to wear as a result of it. Here’s the shot. 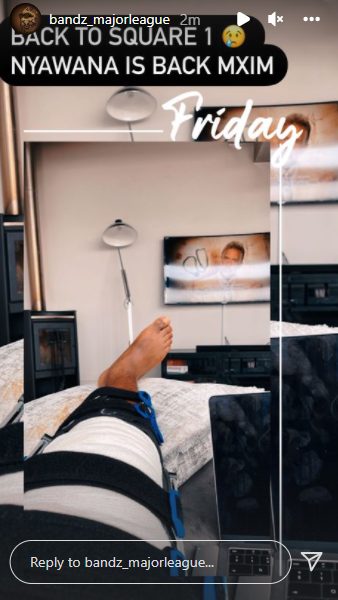 By the way, Bandile and his twin Banele were formerly into hip hop music and released several songs in the genre. With amapiano gaining traction, however, the brothers had ditched hip hop for yanos and have become successful in the genre as well.

Tags
Bandz (Major League)
John Israel A Send an email 5 February 2022
Back to top button
Close
We use cookies on our website to give you the most relevant experience by remembering your preferences and repeat visits. By clicking “Accept All”, you consent to the use of ALL the cookies. However, you may visit "Cookie Settings" to provide a controlled consent.
Cookie SettingsAccept All
Manage Privacy