“Job Woods” star Gigi Lamayne appears to be down in the dumps right now, feeling she’s not being appreciated in South African hip hop.

The songstress, a protégé to the late PRO, has been in the industry for years. But she feels South African hip hop has not done well by her. So she has elected to just focus on her fans.

Gigi Lamayne made her thoughts known in a tweet yesterday 8 March. Her post provoked mixed reactions from her fans. Some of them acknowledged her contributions to the genre and urged her to stick around. 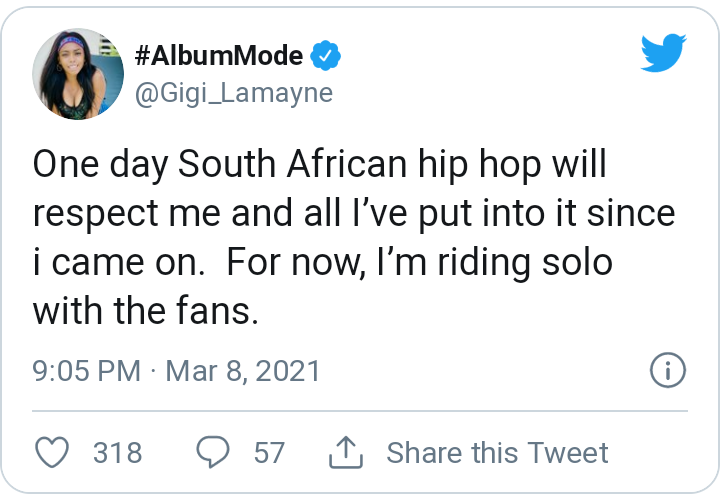 The hip hop scene is not exactly an easy one to break into in South Africa, especially for the ladies. Gigi Lamayne had shown remarkable promise at the time she popped on the scene. When she lost her mentor PRO, she was seriously broken and cried aloud, wondering who would protect her now that he’s gone.

Well, do you know think Gigi Lamayne’s efforts are not being respected as she claims? You may want to join the conversation by dropping your thoughts in the comment section below.