Social media users are divided in a heated debate after a picture of Family Tree boss Cassper Nyovest having a handshake with former South African president Jacob Zuma popped online.

The picture, which was said to have been shot in Nkandla, followed the former president’s meeting with the leader of the Economic Freedom Fighters (EFF) Julius Malema. Following the meeting, during which the two leaders shared tea, ex President Zuma appears to be making moves in public visibility.

By the way, the former president I standing trial on corruption charges. He has not pleaded guilty to the charges against him.

The picture of Cassper Nyovest and the former South African president has provoked mixed reactions online. Some fans were for the “Amademoni” hitmaker pleasing himself by meeting whoever he fancies – politician or not. 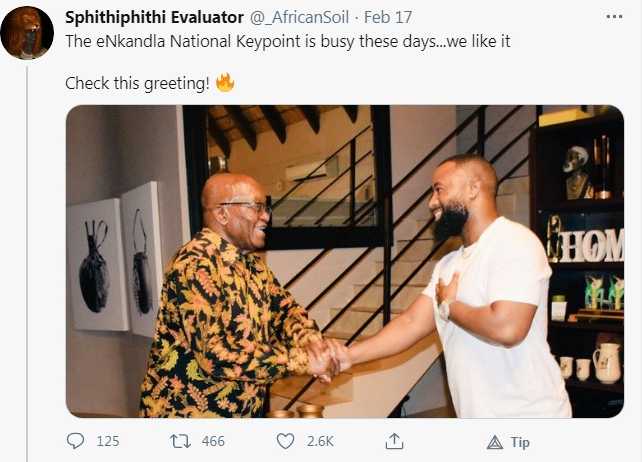 Well, some fans think it a PR stunt. One particular fan even insisted that Cassper and Julius Malema are cut from the same cloth and will do anything for publicity, and yet another insists Cassper will soon make a song for Jacob Zuma.

Tags
Cassper Nyovest Jacob Zuma
John Israel A Send an email 18 February 2021
Back to top button
Close
We use cookies on our website to give you the most relevant experience by remembering your preferences and repeat visits. By clicking “Accept All”, you consent to the use of ALL the cookies. However, you may visit "Cookie Settings" to provide a controlled consent.
Cookie SettingsAccept All
Manage Privacy