Cassper Nyovest’s rare picture of him and his son has got South Africans nodding approval.

Since the birth of his son, who’s currently a year old, the songster has been sharing images of him, but with the kid’s face either covered or averted. In the latest clip that had South Africans talking, the kid’s face was also averted.

Father and son were on the staircase, with Cassper standing and Khotso sitting, but the bond was unmistakable. In the caption to the post, Cassper had spoken of legacy ad the vitality of grinding even harder.

It was a memorable moment that wasn’t lost on the fans. In the comments to the post, fans were speaking of daddy goals and commending the “Doc Shebeleza” hitmaker for the bond with his son. 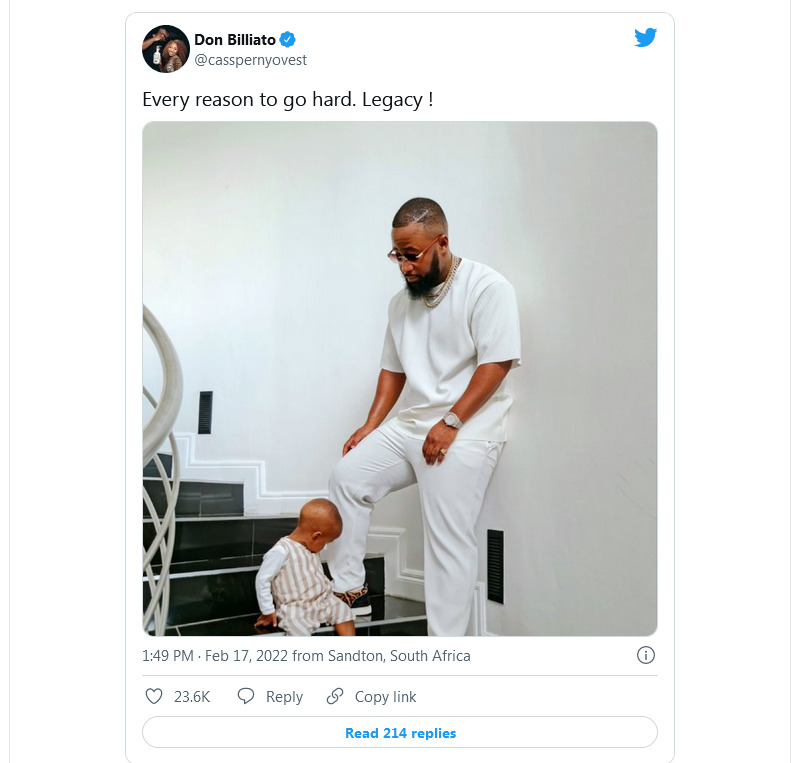 Some fans even used the post to not only be so blessed but to have a similar bond with their kids.

By the way, controversy had erupted recently when MacG claimed that Cassper was smashing Kamo Mphela and that the footballer Andile Mpisane was smashing Cassper’s baby and that he might be the father of Khotso, whom Cassper has claimed as his.

Interestingly, at the moment, dome fans think they have noticed a sudden new bond between Cass and Khotso, and their guess is that he’s just done a DNA to confirm the kid is his.

Tags
Cassper Nyovest
John Israel A Send an email 19 February 2022
Back to top button
Close
We use cookies on our website to give you the most relevant experience by remembering your preferences and repeat visits. By clicking “Accept All”, you consent to the use of ALL the cookies. However, you may visit "Cookie Settings" to provide a controlled consent.
Cookie SettingsAccept All
Manage Privacy