Master KG’s attempt to show off his wealth appears to have backfired, as social media users merely yawned in boredom and asked him to be humble.

The “Jerusalema” hitmaker shared a picture of him and a companion in what appears to be a field. While Master KG fiddled with his phone, his companion appeared to be observing what Master KG was doing.

In the caption to the picture, Master KG had indicated he was checking his bank balance, describing it as “lit.” his attempt to impress with how much he has accumulated so far did not impress some social media users. 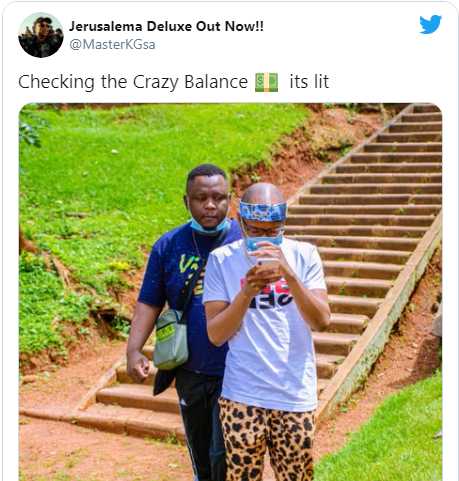 It wasn’t all criticism, though. Some Twitter denizens commended the songster, letting him know they are happy for him.

Master KG is currently living the life – as the saying goes. The musician’s “Jerusalema” song has turned out his biggest hit to date, fetching him serious money. In fact, at this point, some think he can comfortably rest from releasing music and live forever on the profits from the song

What do you think of Master KG flexing his bank balance and the backlash it generated? You may want to join the conversation by dropping your thoughts in the comment section below.

Tags
Master KG
John Israel A Send an email 27 February 2021
Back to top button
Close
We use cookies on our website to give you the most relevant experience by remembering your preferences and repeat visits. By clicking “Accept All”, you consent to the use of ALL the cookies. However, you may visit "Cookie Settings" to provide a controlled consent.
Cookie SettingsAccept All
Manage Privacy