South Africa appears to be stepping into a season of revelation, with the alleged dirt being on amapiano producer DJ Maphorisa.

And if the allegations against the amapiano ace are to be believed, then the songster had dug his own grave. Here’s the back-story…

Now that he’s experienced success along with Mlindo, Nyiko had reportedly ditched DJ Maphorisa, and so has Mlindo – say DJ Maphorisa says. 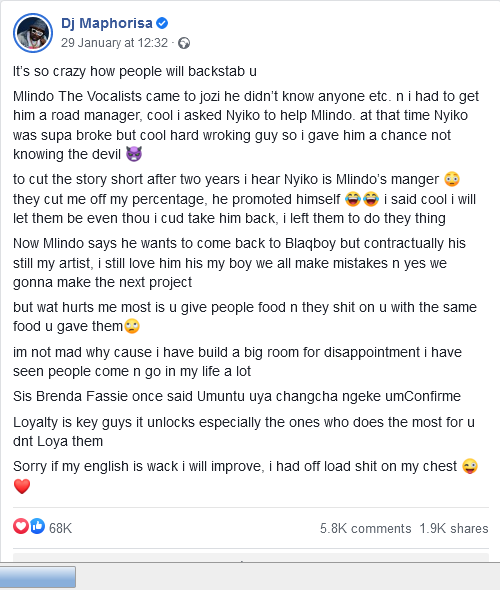 In an interview on Podcast and Chill with MacG, though, Nyiko claimed that DJ Maphorisa was lying. He accused the Piano King of exploiting Mlindo. He also rubbished Maphorisa’s claim that he was broke when he became Mlindo’s manager.

Well, Since Nyiko’s revelation, other artists, including Howard, have come out to state that their experiences with DJ Maphorisa were just as unsavory and that he exploited them.

Stunned by the unfolding revelation, South Africans are asking DJ Maphorisa to tell his side of the story or they will cancel him. Well, it remains to be seen if and what DJ Maphorisa will say.

Tags
Dj Maphorisa
John Israel A Send an email 10 February 2022
Back to top button
Close
We use cookies on our website to give you the most relevant experience by remembering your preferences and repeat visits. By clicking “Accept All”, you consent to the use of ALL the cookies. However, you may visit "Cookie Settings" to provide a controlled consent.
Cookie SettingsAccept All
Manage Privacy