NaakMusiq reignites his acting skills as part of the cast of the BET Africa series ISONO. There’s nothing surprising about his feature in the series, though. Naakmusiq is also an actor. But then he is most famous for his music.

Naakmusiq, who is part of the BMW-loving celebs in Mzansi, is pretty excited about his feature in the series. He shared the flier of the upcoming flic, encouraging fans to check it out when it drops. 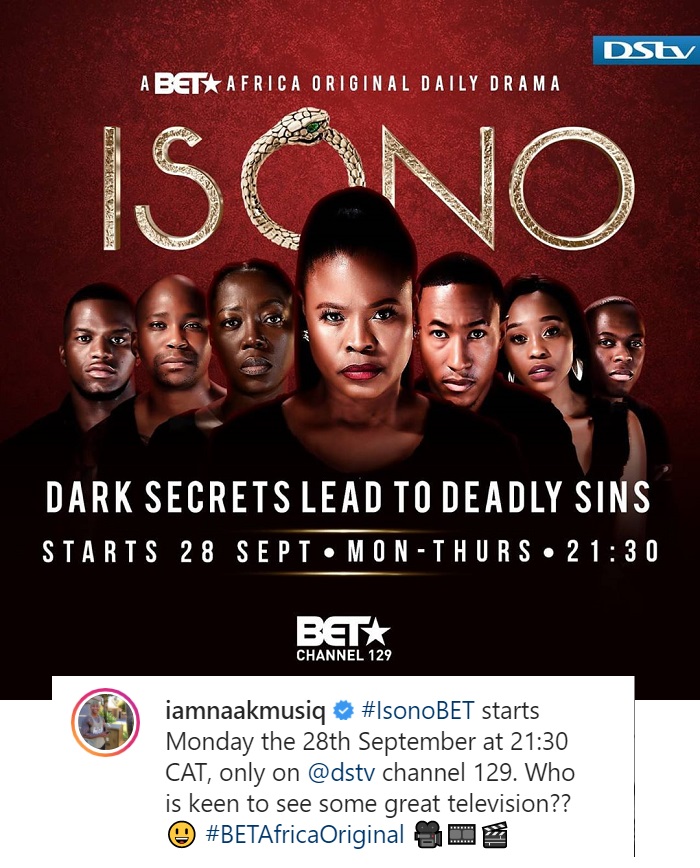 ISONO  the series premieres on Monday the 28 September at 21:30 CAT on Dstv channel 29. The series was to have been produced earlier, but the coronavirus pandemic provoked changes in the release date and more.

Now that a definite release date has been shared, fans are excited about what is to come. ISONO the movie, which also has Esther Ndlovu, Gabriel Ndlovu, Abednego, and Jumima as part of the cast, explores the duality of human, juxtaposing good and evil. You can check out the trailer below.

What do you make of the trailer? Is it inspiring enough to make you want to look forward to the full flick? You may want to join the conversation by dropping your thoughts in the comment section below.

Tags
Naakmusiq
John Israel A Send an email 8 September 2020
Back to top button
Close
We use cookies on our website to give you the most relevant experience by remembering your preferences and repeat visits. By clicking “Accept All”, you consent to the use of ALL the cookies. However, you may visit "Cookie Settings" to provide a controlled consent.
Cookie SettingsAccept All
Manage Privacy