What was supposedly a bad situation, Family Tree rapper Nadia Nakai turned into a big win. In case you’re still unaware. The songstress once dated Bandile Mbere, one of the brothers who make up the group Major League – also called Major League DJz.

The relationship ended and Nadia Nakai found solace in a song called “More Drugs,” which made it to her sophomore album “Nadia Naked” and the  deluxe edition of the same work.

“More Drug” has since been certified gold and Nadia Nakai is excited about this. If you haven’t listened to “More  Drugs,” you may want to check it out below. The music video has been viewed over 389k times since it dropped in January 2020.

Taking to Twitter yesterday 4 September 2020, the rapper noted with amusement that it was ironic a break up had won her gold. You can check out her tweet below. 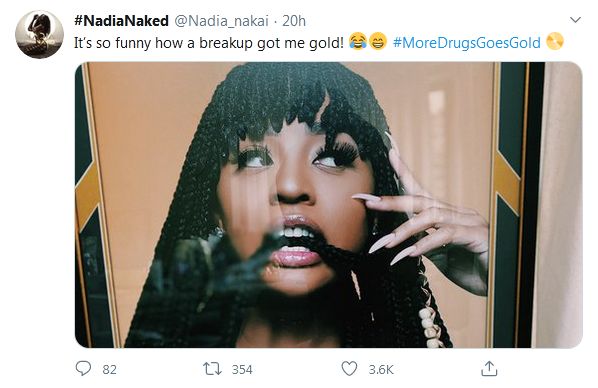 She also shared another image about her gold win, still holding to her plaque. She noted that it took patience and hard work to get to where she currently is. She added that she isn’t letting anyone get her down.

Well, what do you think? You may want to drop your thoughts in the comment section below.