Nadia Nakai is one rapper famous for verbalizing her good thoughts about fellow entertainers. From Cassper Nyovest to Tshego to Gigi Lamayne, Nadia Nakai has good words for almost everyone.

Yesterday, 7 July 2020, was Gigi Lamayne’s birthday, and Nadia Nakai took to Twitter to celebrate her. According to the “Yass Bitch” rapper, Gigi Lamayne is a queen who inspires her so much. He wished her a happy birthday and told her how deeply he loves her. 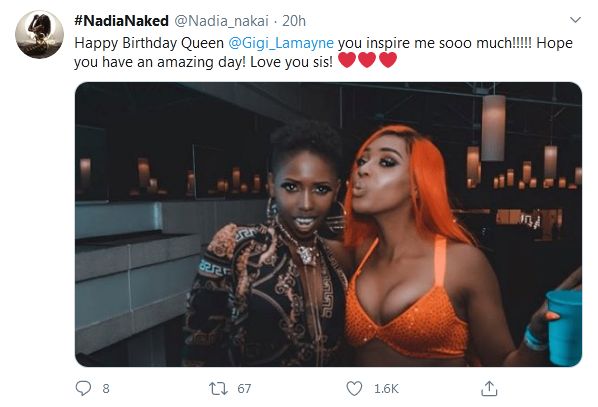 July 7 was Gigi Lamayne’s 26th birthday. The industry literally stood up to celebrate her. Nadia Nakai was among those who were effusive and public with their wishes. Perhaps this should surprise no one as both artistes are friends.

Also, individually, they are doing remarkably well in the world of South African hip hop. In fact, in a sense, they share a common destiny, which is a commitment to hip hop.

By the way, Nadia Nakai is currently working on a deluxe edition of her “Nadia Naked” album. We will bring it right here to you when it drops.

Well, have you got some birthday wishes to share with Gigi Lamayne? You may want to jon the conversation by sharing them right here in the comment section.

Tags
Gigi Lamayne Nadia Nakai
John Israel A Send an email 8 July 2020
Back to top button
Close
We use cookies on our website to give you the most relevant experience by remembering your preferences and repeat visits. By clicking “Accept All”, you consent to the use of ALL the cookies. However, you may visit "Cookie Settings" to provide a controlled consent.
Cookie SettingsAccept All
Manage Privacy