Nasty C can do whatever he wants and we would all support him. That’s how much we love him. Last year, the Mzansi rapper dropped the highly anticipated “Zulu Man With Some Power” album and fans were thrilled by it.

It was promoted by the hits “There They Go”, “Eazy” and several other joints. He also recently dropped a video for “Black And White” featuring Ari Lennox. The song is featured on the “Coming 2 America” soundtrack. Now, he has announced another stunning project he’s been working on.

He titles it the “Zulu Man With Some Power” podcast. It is powered by Old Mutual SA and AMPD Studios. The forthcoming podcast will feature local and international acts including Black Coffee, DJ Whookid, and more. This is truly something to look forward to. We can’t wait. 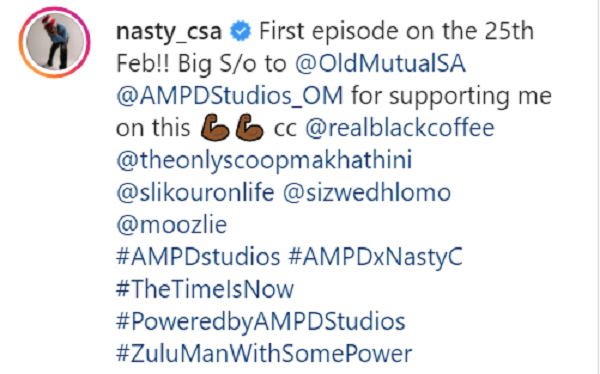 Tags
Nasty C
John Jabulani Send an email 22 February 2021
Back to top button
Close
We use cookies on our website to give you the most relevant experience by remembering your preferences and repeat visits. By clicking “Accept All”, you consent to the use of ALL the cookies. However, you may visit "Cookie Settings" to provide a controlled consent.
Cookie SettingsAccept All
Manage Privacy