Nasty C launches the Zulu Man With Some Power podcast, with its first episode featuring Slikour.

Nasty C is back in full force. The SA Hip Hop star is always hard at work on something. He recently announced to fans that he would be launching a new podcast named after his latest album “Zulu Man With Some Power”.

Of course, it is something to follow. Nasty C also recently dropped a music video for his song “Black And White” featuring Dreamville act, Ari Lennox. The song is also included in the soundtrack for the forthcoming movie “Coming 2 America”. You should check the podcast out. 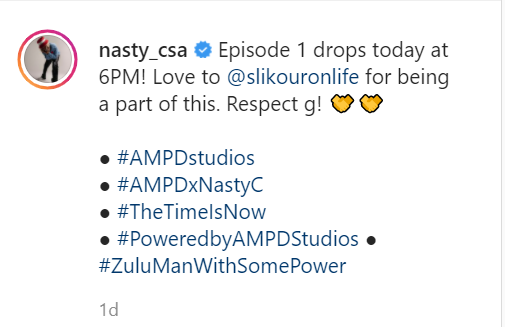 Tags
Nasty C
John Jabulani Send an email 26 February 2021
Back to top button
Close
We use cookies on our website to give you the most relevant experience by remembering your preferences and repeat visits. By clicking “Accept All”, you consent to the use of ALL the cookies. However, you may visit "Cookie Settings" to provide a controlled consent.
Cookie SettingsAccept All
Manage Privacy