Mzansi musos are winning, and it’s all there for all to see. It has just been revealed that Anatii, Nasty C, Prince Kaybee, Msaki, and other Mzansi musos are part of artistes whose songs will be used as soundtrack for the intensely anticipated movie, Coming 2 America.

The movie, now a global classic, was originally released in 1988. Another episode is imminent on 5 March 2021, thanks to a clamour for a return of the movie. Besides South African musicians contributing to the soundtrack to the movie, a notable South African actress, Nomzamo Mbatha, is part of the movie’s cast.

The list of artiste who contributed to the Coming 2 America soundtrack indicates that South Africa was adequately represented.

Other Mzansi artistes on the soundtrack are Tellaman (with “Overdue,” a song featuring Sha Sha (Zimbabwe) and Oxlade (Nigeria)); DJ Ganyani (with an amapiano remix of Tiwa Savage’s “Dangerious Love”), De Mthuda and Njelic (with “Shesha”) and Gemini Major and Anatii (with “Loke Loke”).

Below is the full list of artistes on the soundtrack. 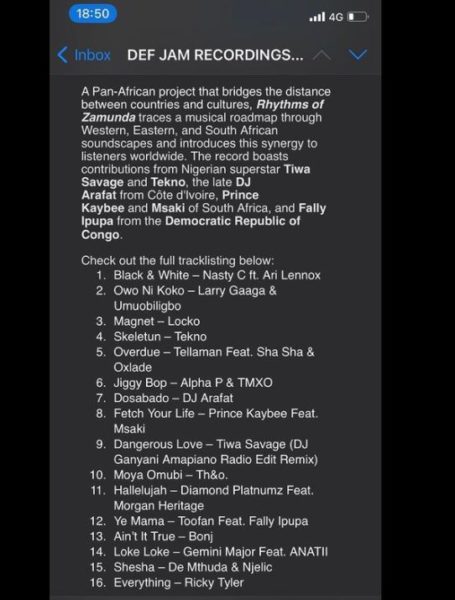 What do you make of the songs on the tracklist? Would you have adopted something similar? You may want to join the conversation by dropping your thoughts in the comment section below.

Tags
Anatii Msaki Nasty C Prince Kaybee Sha Sha
John Israel A Send an email 14 February 2021
Back to top button
Close
We use cookies on our website to give you the most relevant experience by remembering your preferences and repeat visits. By clicking “Accept All”, you consent to the use of ALL the cookies. However, you may visit "Cookie Settings" to provide a controlled consent.
Cookie SettingsAccept All
Manage Privacy