Out on social media, some peeps are calling Nasty C’s girlfriend Sammie a nasty gold digger. And the “Zulu Man With Some Power” is amused by it all.

A Twitter denizen who goes by the name at Slik Talk had described Sammie Heavens as a failure with no personal achievements, leeching on Nasty C. He also accused her of living off her parents as well.

Sammie Heavens, the subject of the Twitter user’s scorn, has no words for the user. But her man rose instantly to her defence. In reply to the user’s tweet, Nasty C stated that she is indeed nasty (is he punning here?). He describes her as his backbone. 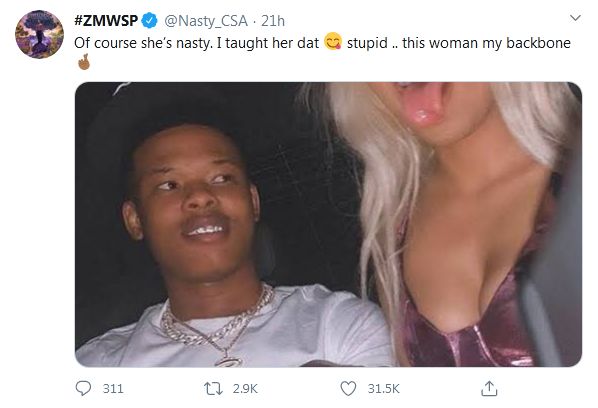 Previously, in a video post on Twitter, the songster had thanked his girlfriend’s mother for giving birth to her. He credited Sammie as being the very first person to sing his songs back to him, and he values that immensely. He promised he would always be on her side.

By the way, Nasty C recently released a body of work titled “Zulu Man With Some Power” and followed it up with a tour of Japan documented on Netflix as Zulu Man In Japan.

The documentary plays for about 48 minutes.