South African rapper Nasty C has just recorded another career milestone with reports that his album “Strings and Bling” is the first South African hip hop album to reach 20 million streams on Spotify.

To some critics, the songster has vanished from visibility and relevance following his relocation to the United States, but it’s clear the Coolest Kid in Africa is still musically relevant. 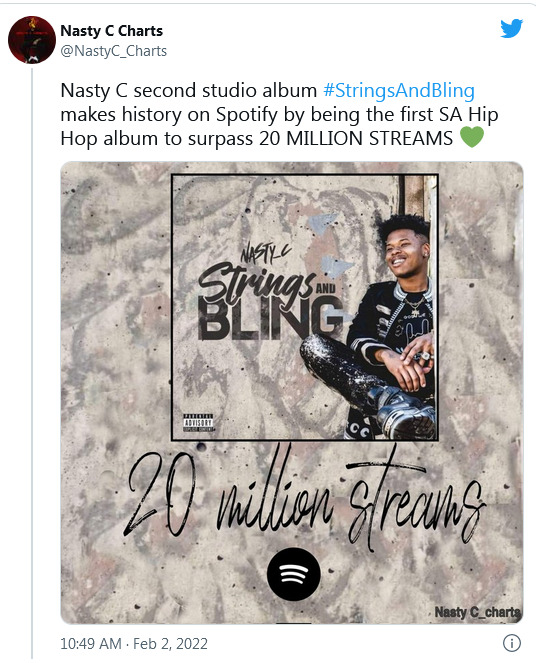 Nasty C hasn’t said anything about the recently – certainly not on his Instagram and not at the time of writing – but if he’s aware of the milestone, he’ll certainly be chuffed with it.

The songster had relocated to the United States following his signing to Def Jam. South Africans have been divided about his move to the States, with some calling it a positive for his career.

However, his critics are saying he’s becoming irrelevant at home, and that posing with known faces in American rap does not translate to a major impact on the music scene.

Will his Spotify milestone change that perception? We’re watching and will bring you more details.

Tags
Nasty C
John Israel A Send an email 5 February 2022
Back to top button
Close
We use cookies on our website to give you the most relevant experience by remembering your preferences and repeat visits. By clicking “Accept All”, you consent to the use of ALL the cookies. However, you may visit "Cookie Settings" to provide a controlled consent.
Cookie SettingsAccept All
Manage Privacy