It has been an amazing year for some of Mzansi’s most talented acts. Especially for the world’s most recent breakout stars, Nomcebo and Master KG. The two have achieved a lot of success since the release of their collaborative hit “Jerusalema”.

Nomcebo Zikode proved to Mzansi that there is very much more to her when she delivered her album “Xola Moya Wam”. The album’s title track features her “Jerusalema” collaborator, Master KG. The song fast became a success, hitting number one on the Apple Music songs charts.

Nomcebo recently took to Twitter to reveal that the song has just been certified platinum in Mzansi. She thanked her faithful supporters and her team which she called “wonderful”. She also urged fans to keep buying her songs on all digital platforms. Big congratulations to her, everyone knows she deserves it and more. 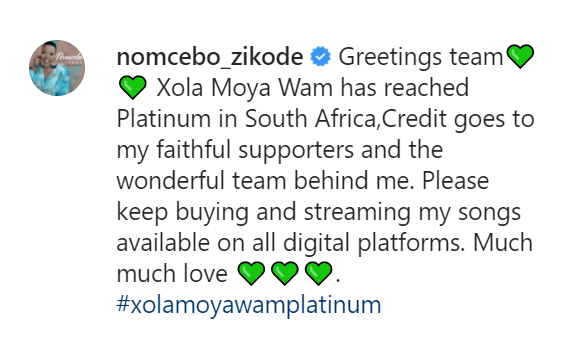