There is financial war in the Open Mic productions house as Nomcebo, record label and Master KG fight over money split for the hit song Jerusalema. Nomcebo is calming she has not been paid accordingly. 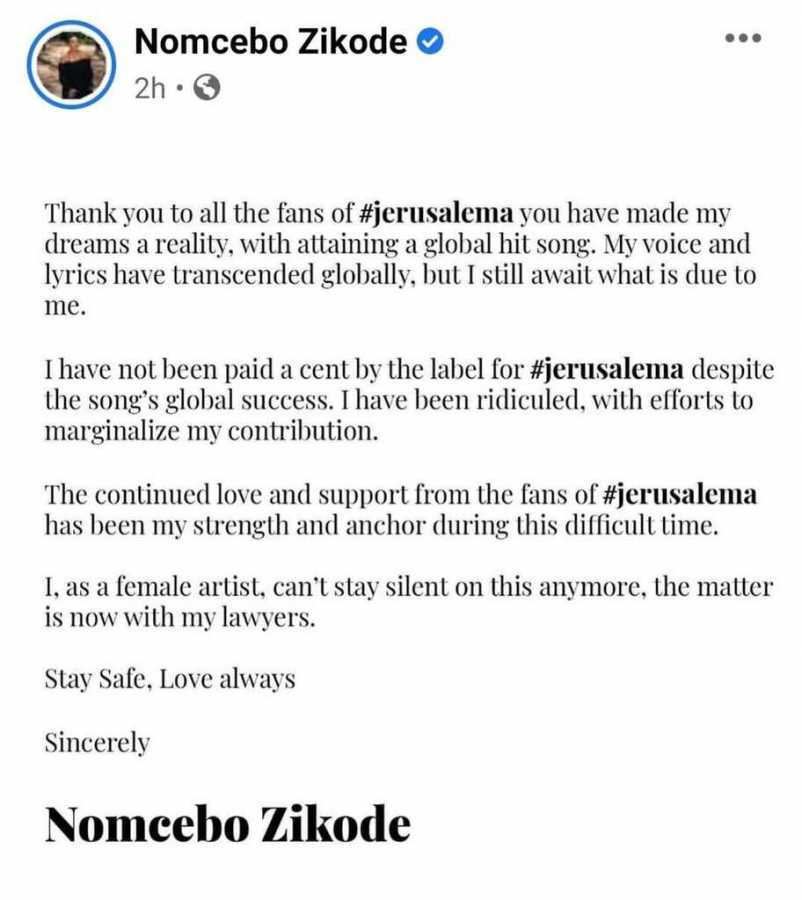 The Jerusalema song opened many doors for the South African music scene as it became the biggest song ever released in the country, breaking charts worldwide and receiving numerous awards, even in countries that one wouldn’t have imagined. Jerusalema at present sits 400 million views on YouTube. He song was multiplatinum in major countries, including Italy.

The song was produced by Master KG while Nomcebo Zikode co-wrote and added her vocals. In the music world, they would mean that both artists have some level of rights to the song, depending on the kind of agreement they have signed and the parties involved.

Jerusalema was produced on 11th of August 2019, and after Master KG shared the song on social media, it commanded positive feedbacks from fans across the globe, the song was formally released on streaming services on 10th of July by Elektra France and Warner France.

Master KG made history as he became the first African music artist to win the France’s respected NRJ Music Award in the institution’s 20-year history and Jerusalema won the International Song of the Year at the awards. The talented singer Nomcebo and music producer/DJ master KG made magic with their international breakthrough, money made from the song is in the millions.

It was in the news few weeks ago that Master KG will begin his world tour and Nomcebo has been replaced, fans were not happy about it and they expressed how they felt but Neither Master KG nor Nomcebo had come out to address the claim. Nomcebo Zikode was allegedly put aside by Open mic management and they had replaced Nomcebo with Zanda Zakuza to go on tour and sing Jerusalema while Master KG toured Paris.

While Master KG and Open Mic Productions boss were on tour in Europe, valued vocalist and co-writer of Jerusalema Nomcebo Zikode turned to her legal team from Rosengarten & Feinberg and tendered a written letter of demand to Open Mic Productions after allegedly claiming to not have been paid a dime from Jerusalema music distribution.

Sunday World is reporting that an insider told them that Nomcebo has not been paid the alleged 50% royalties she is expected to get from the song.

She has not been paid a cent for Jerusalema. They could not reach an agreement, so Nomcebo had to consult with her lawyers. The record label called her demand ‘ridiculous.’ How is 50% ridiculous. She wrote the lyrics and sang them, he produced the song. That should count for something,

Master KG is now breaking his silence, according to him, the agreement between both artists was  50/50 split, but Nomcebo now wants 70% and expect Master KG who produced the song to take 30, Master KG is coming out because according to him, he is beginning to look like the bad one and he wants Nomebo to come clean that she has received some money.

Master KG is also claiming that Nomcebo had received R1.5M worth of royalties from the hit song and he has not been paid a dime for Xola Moya Wami. 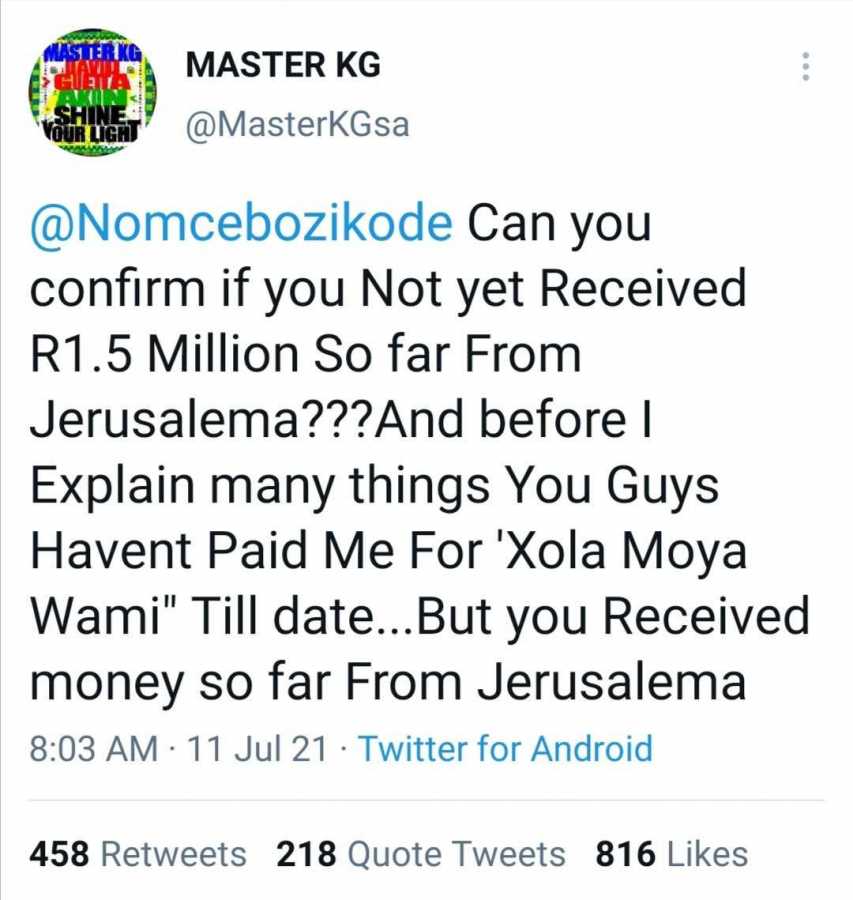 Nomcebo is quite popular for wanting more than what she bargained for. Allegedly, she had a similar spat with Ganyani over Emazulwini, she claimed Ganyani cheated her. When the issue was scrutinized thoroughly it was found out that she got what was due to her regardless of what song they made. You can read more on Sowetanlive.

The question now is, did she sign a contract with Master KG or Open Mic Productions? and what is the content of the contract?. These two questions has not been brought to the public, instead what we see is a fight for money grab.

“The problem started when Nomcebo asked for her share in royalties. That pissed them off and they started using Zanda. It’s never been done before and it’s not fair that where you write all the lyrics, record, and release but you are not allowed to sing the song because of a dispute,”

Tags
Master KG Nomcebo Zikode Open Mic Productions
Thato Siyabonga Send an email 11 July 2021
Back to top button
Close
We use cookies on our website to give you the most relevant experience by remembering your preferences and repeat visits. By clicking “Accept All”, you consent to the use of ALL the cookies. However, you may visit "Cookie Settings" to provide a controlled consent.
Cookie SettingsAccept All
Manage Privacy