“Jerusalema” songstress Nomcebo recently disclosed her encounter with media personality Anele Mdoda. It was a pleasure meeting Anele, and Nomcebo said that much, sharing a picture of them together.

The picture was a hit with their fans. They thought the two simply beautiful together and praised them to the heavens. 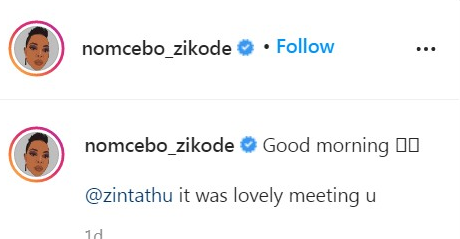 Nomcebo Zikode is one of the notable music figures in South Africa. She came to the limelight only recently, thanks her “Jerusalema” song with Master KG. She had written part of the lyrics of the song, which became a global hit on release.

Although a remix to the song was released, it wasn’t as successful as the original track. At any rate, Nomcebo is already in the consciousness of the public and has been working hard to remain musically visible, performing at home and abroad and of course meeting media personalities and giving radio interviews.

Her recent meeting with Anele Mdoda was a big win as much for her as for her fans, who have been desiring to see them together. The two look good together, really, as should be obvious from the picture of them at the outset.

Or what do you think? You may want to share your thoughts below.

Tags
Anele Mdoda Nomcebo Zikode
John Israel A Send an email 12 February 2021
Back to top button
Close
We use cookies on our website to give you the most relevant experience by remembering your preferences and repeat visits. By clicking “Accept All”, you consent to the use of ALL the cookies. However, you may visit "Cookie Settings" to provide a controlled consent.
Cookie SettingsAccept All
Manage Privacy