It’s all good news in Nomcebo Zikode’s orbit. “Xola Moya Wam,” the lead single in her album of the same title has gone gold. The songstress shred the good news herself in an Instagram post late yesterday 2 September 2020.

Her gold triumph follows another triumph and one that literally watered her soul with goodness. The Portuguese footballer Christiano Ronaldo had shared a clip of “Jerusalema,” her collaborative single with Master KG, causing great excitement in South Africa. A grateful Nomcebo had thanked the footballer in an Instagram post.

Before then, the song had reached a milestone of 100 million views on video-sharing platform YouTube. This makes it the very first song by a South African to reach that milestone. It is even predicted the song will reach 1 billion views soon.

Well, “Xola Moya Wam” single attaining gold status is especially significant for Nomcebo in that, as she herself admitted, it is the first song in which she is the lead artiste (not featured) to reach gold. 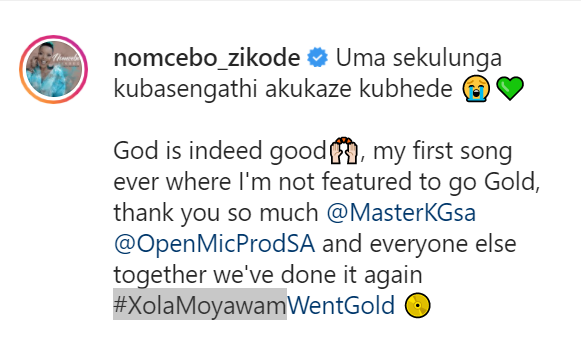 She is grateful to Master KG and the record label Open Mic Productions for their roles in her success. Well, what do you think? You’re welcome to join the conversation by dropping your thoughts in the comment section below.