“Jerusalema,” Nomcebo’s collaborative video with Master KG, recently reached a milestone of 100 million views on YouTube. It is on record to be the first music video by a South African artiste to reach that mark.

Bonang Matheba, like many others out there, is impressed by the achievement and has praised Nomcebo in a tweet, describing her as the magic. You can check out her tweet below.

While some fans shared BonangMatheba’s view, others asked her why she didn’t mention or congratulate Master KG as well. Well, she has no answer to those questioning her omission of Master KG. There is clearly no beef between her and the champ, though.

The response to her verdict on Nomcebo was overwhelmingly positive, however. You can check out some of them in the screenshots below. 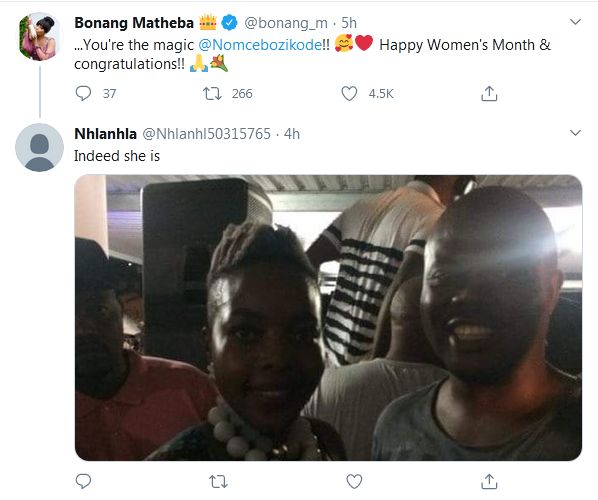 By the way, Nomcebo recently released “Xola Moya Wam” album to purrs of pleasure across South Africa and beyond. That body of work featured Master KG, who was also involved in its production. It is worth hearing, if you asked us. Do well to check it out

Well, what do you think of “Jerusalema”‘s 100 million YouTube views milestone and Bonang’s congratulatory message to Nomcebo? You are welcome to join the conversation by dropping your thoughts in the comment section below.

Tags
Bonang Nomcebo Zikode
John Israel A Send an email 27 August 2020
Back to top button
Close
We use cookies on our website to give you the most relevant experience by remembering your preferences and repeat visits. By clicking “Accept All”, you consent to the use of ALL the cookies. However, you may visit "Cookie Settings" to provide a controlled consent.
Cookie SettingsAccept All
Manage Privacy