Nomoozlie is in high spirits, as she showers nothing but praises on her current partnership deal with Castle Lite, South Africa.

Nomoozlie is living her dreams, with zero regrets after she had lost her partnership deal with Vodka, South Africa. The rapper and the vodka company had began working in collaboration back in September of 2020. But Nomoozlie had a massive fallout with the alcohol brand after she promoted Castle Lite on her social media pages.

The “Get Cash” hitmaker got some props from one of her Twitter followers, who appreciated the rapper’s current partnership with Castle Lite. “Not to be bias or anything but Castle Lite and Nomuzi have a cool partnership.”

Responding to the appreciation tweet, Moozlie couldn’t agree more with the Twitter user, vehemently raining down praises on her current deal with the alcohol brand. The rapper summed it up by  mentioning that there is no other good partnership in the game compared to the one she has with Castle Lite. “You don’t even need to be bias cuz. Coolest & most consistent partnership in the game. No other brand gets it, or at least me, like they do,” Moozlie tweeted. 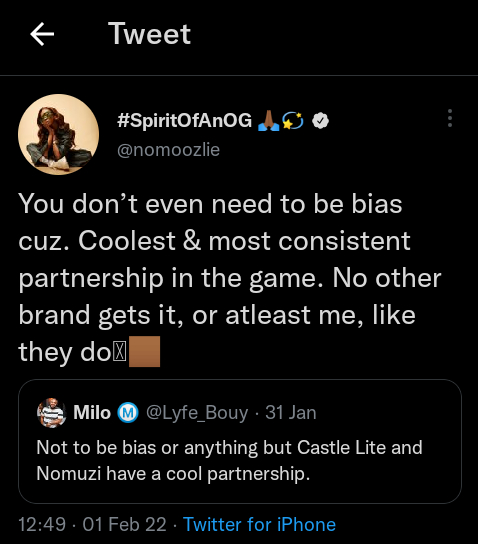 Moozlie and Castle Lite have come up with initiatives to make sure they keep Mzansi entertained with Live Streams.

Tags
Nomoozlie
Ikedichim Chibundu Send an email 12 February 2022
Back to top button
Close
We use cookies on our website to give you the most relevant experience by remembering your preferences and repeat visits. By clicking “Accept All”, you consent to the use of ALL the cookies. However, you may visit "Cookie Settings" to provide a controlled consent.
Cookie SettingsAccept All
Manage Privacy