Media star, Nota Baloyi’s wife slams online bullies who drag her into her husband’s controversies as a result of his opinions.

Nota Baloyi is one of Mzansi’s most controversial personalities. The media star is known for his hard opinions which always rubs many as harsh. Despite his on air personality, Nota has managed to keep his private life away from the public eye.

Apparently, most Twitter users would not let it be that way. A recent tweet by Nota’ wife, Berita proves that she has been getting bullied on social media as a result of her husband’s controversial opinions. She called out her bullies saying that they “are crossing behind line”.

According to the Afro Soul star, she refuses to be bullied because her husband has a public persona. She further asked them to keep her name out of it. If you must know, it is only love and light from her end. 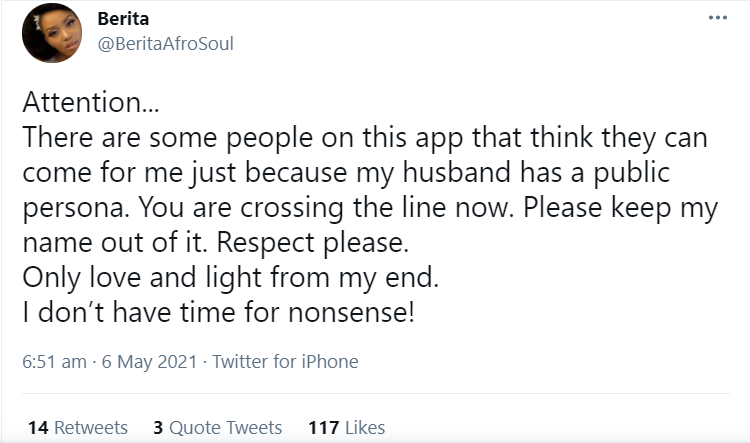 Tags
Berita Nota
John Jabulani Send an email 11 May 2021
Back to top button
Close
We use cookies on our website to give you the most relevant experience by remembering your preferences and repeat visits. By clicking “Accept All”, you consent to the use of ALL the cookies. However, you may visit "Cookie Settings" to provide a controlled consent.
Cookie SettingsAccept All
Manage Privacy