We all can’t deny there’s a lot of drama in SA Hip Hop and there are usually a list of people who start that drama. One of them is the very opinionated Nota who is known to always speak his mind about anything no matter what anyone thinks.

This time, he’s got someone in his radar, someone he says is a “Soft Boy”. That’s SA Hip Hop star, Stogie T. In a recent tweet shared by Nota, he reveals that the “T” in Stogie’s name stands for “Trust-fund” because he’s a trust-fund baby. He also goes on to reveal that Stogie’s name is Boity which also makes him a “Soft Boy”.

We dont know if the “Son Of A Soldier” rapper has heard these subs because he is yet to respond. We wonder if he would want to respond to them. 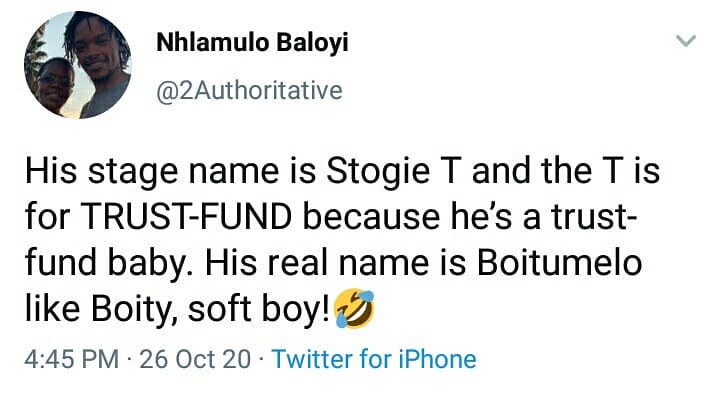 Tags
Nota Stogie T
John Jabulani Send an email 27 October 2020
Back to top button
Close
We use cookies on our website to give you the most relevant experience by remembering your preferences and repeat visits. By clicking “Accept All”, you consent to the use of ALL the cookies. However, you may visit "Cookie Settings" to provide a controlled consent.
Cookie SettingsAccept All
Manage Privacy