Controversial music executive Lavida NOTA has been hauled to court – again. This time, music producer Shimza had NOTA by the jugular, and he’s determined the music executive should somehow pay for his infractions.

NOTA had been slammed with a defamation of character suit by DJ Shimza, who’s insisting that the former defamed him with what he posted on Twitter. For context, NOTA had earlier tweeted about the tenders Shimza won through his eatery HangAwt, noting it wasn’t done through due process.

In a recent tweet, he informed fans about the suit Shimza had instituted against him, noting that he would be at the Johannesburg High Court, where the case would be heard. However, he claimed that it was Shimza’s people at Tembisa that exposed his tender’s case.

In a follow-up tweet, he had noted that he’s in the court to defend himself. He also said that Shimza is in Portugal for a gig and wondered if Shimza’s absence wouldn’t weaken his bid to prosecute the case. He ended up noting that Shimza has no leg to stand on as regards the case. You can check out the tweet below. 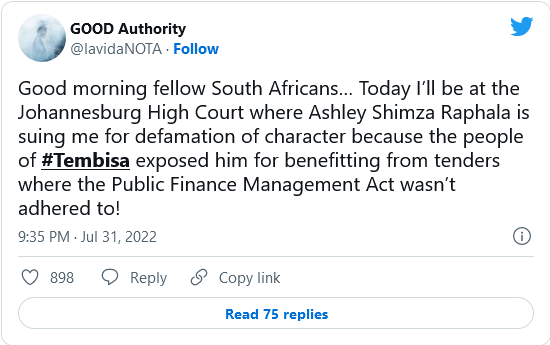 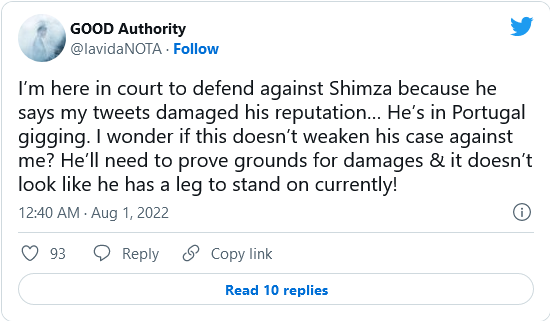 It’s unclear what the outcome of the case would be. But then we’re following the case keenly. Stay tuned.

Tags
Nota
John Israel A1 August 2022
Back to top button
Close
We use cookies on our website to give you the most relevant experience by remembering your preferences and repeat visits. By clicking “Accept All”, you consent to the use of ALL the cookies. However, you may visit "Cookie Settings" to provide a controlled consent.
Cookie SettingsAccept All
Manage Privacy